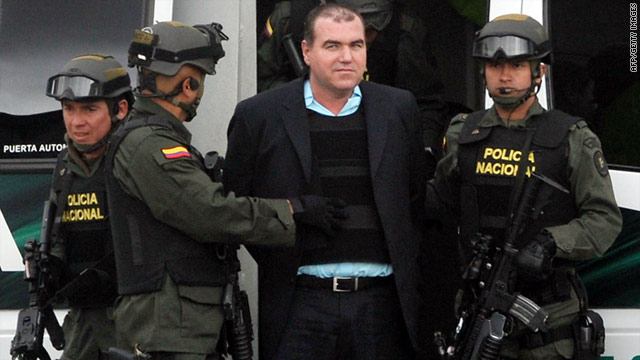 Colombian police escort Walid Makled Garcia to an aircraft to be extradited to Venezuela on Monday at an air base in Bogota.
STORY HIGHLIGHTS
RELATED TOPICS

(CNN) -- Walid Makled Garcia, accused of being one of the world's top drug lords, was extradited from Colombia to Venezuela on Monday, Venezuelan state media said.

Makled arrived at a military base in Caracas late Monday morning, the state-run AVN news agency reported. Colombian authorities arrested him in August.

In Venezuela, Makled is accused of drug trafficking and killing a journalist who was investigating his family.

The United States designated Makled as one of the world's most significant drug kingpins in May 2009 and had also requested his extradition.

Makled, also known as "El Turco" and "El Arabe," has said he paid bribes of more than $1 million a month to Venezuelan government authorities and military officials. Venezuelan President Hugo Chavez has denied those allegations.

"Even among global narcotics traffickers, Makled Garcia is a king among kingpins," Manhattan U.S. Attorney Preet Bharara said last year when an indictment against him was unsealed.

U.S. officials say Makled operated and controlled airstrips in Venezuela from 2006 until the time of his arrest.

"He used them to facilitate the shipment of multi-ton quantities of cocaine from Venezuela to Central America and Mexico by numerous drug-trafficking organizations, knowing a portion were destined for the United States," the Justice Department said. "To secure the safe passage of these cocaine shipments, Makled Garcia bribed Venezuelan officials with fees he extracted from the drug-trafficking organizations."

Makled, who denies U.S. accusations of drug trafficking, said in an October interview with Venezuela's El Nacional newspaper that he paid millions of dollars to government officials and top military brass and has the vouchers and bank account numbers to prove it.

Makled, whose family owned a shipping business, has said he made the payments to be allowed to operate at some of the nation's largest ports.

"On my payroll I had (government) ministers, the siblings of ministers, generals, admirals, rear admirals, colonels and five deputies from the National Assembly, each of whom I gave a late-model car to," the newspaper quoted him as saying.

Makled also has said he contributed $2 million to Chavez for a political campaign.

Chavez has strongly denied those accusations and stood up for his government officials.

Makled is wanted in Venezuela on charges that he killed journalist Orel Zambrano, who had been investigating the Makled family businesses, and veterinarian Francisco Larrazabal, linked to horse racing. He is also wanted on drug trafficking charges.

Venezuela's government has seized 11 businesses from Makled, including the airline Aeropostal, one airplane, two boats, 77 trucks and three properties, according to a report from the U.S. State Department last year.

Makled has said the Venezuelan government confiscated many of his businesses after a raid in late 2008, when authorities say they found large quantities of cocaine on a family farm. Makled escaped across the border to Colombia, but three of his brothers were arrested.

The extradition comes amid improving relations between the neighboring South American countries.

Tensions had flared between the two nations after Colombia accused Venezuela of harboring members of the Revolutionary Armed Forces of Colombia, a leftist rebel group that has been at war with the Colombian government for years.

But shortly after his inauguration last year, Colombian President Juan Manuel Santos met with Chavez and pledged to wipe the slate clean.