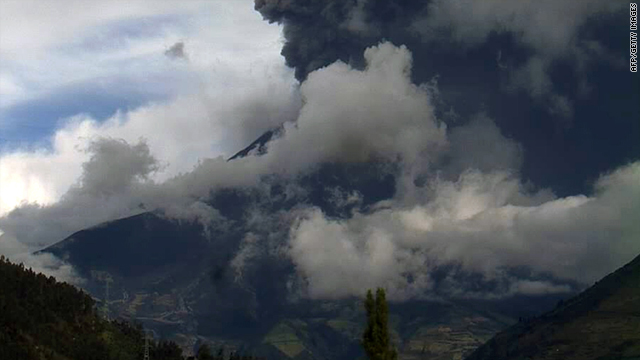 An explosion of Tungurahua volcano can be seen from Guadalupe observatory in Tungurahua province, Ecuador, Tuesday.
STORY HIGHLIGHTS
RELATED TOPICS

(CNN) -- Authorities in Ecuador closed schools and evacuated residents in areas near a volcano Tuesday after ashes spewing from its crater fell on homes and farms, state media reported.

Ashes from Tungurahua -- which means "throat of fire" in the native Quechua language -- rose more than 7 kilometers (4 miles) into the air Tuesday, the government news agency said.

"According to our observations, damages to crops, pastures and small effects to the health of people are already evident," the country's geophysics institute said.

The glacier-capped, 16,478-foot volcano has erupted periodically since 1999, when increased activity led to the temporary evacuation of the city of Banos at the foot of the volcano.

Tungurahua erupted in December, sending ash and lava spewing nearly a mile into the sky.

Major eruptions also occurred in August 2006 and February 2008, according to the government's emergency management agency.

Before the recent activity, the last major eruption was between 1916 and 1918. Relatively minor activity continued until 1925, the Smithsonian Institution said on its volcano website.

The volcano is 140 kilometers (86 miles) south of Quito, Ecuador's capital.