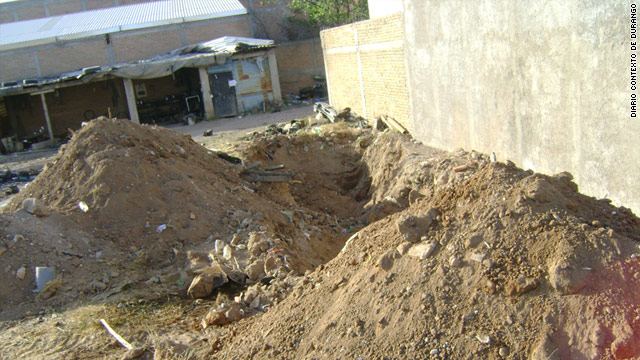 (CNN) -- Authorities in the Mexican north-central state of Durango have confirmed the discovery of 26 bodies in a mass grave. According to the Durango State's Attorney's Office, the bodies were found in a residential area in the capital city of the same name.

Officials say the bodies found late Wednesday were already badly decomposed and so far they haven't been able to identify the victims. The bodies were found in a lot apparently belonging to an auto shop located in the residential area known as "Las Fuentes."

According to local media reports, four other bodies were found on April 11, but the Durango State Attorney's Office did not immediately confirm that information.

Crime scene pictures obtained by the Diario Contexto de Durango newspaper after the bodies had been removed show shallow mass graves right next to a brick wall. The area had already been cordoned off by authorities.

The grisly discovery comes in the same week that authorities in Tamaulipas, a Mexican state that shares a border with Texas, confirmed they have so far found 116 bodies in multiple mass graves. Fifty-nine bodies were originally found on April 6 in eight mass graves in the town of San Fernando, located 90 miles south of Brownsville, Texas. As the investigation widened, authorities kept on finding more bodies, some in groups of several dozen.

Sixteen San Fernando police officers were arrested last week for allegedly protecting those responsible for the mass graves that had been uncovered, according to the Mexican attorney general's office.

Martin Omar Estrada Luna, an alleged drug kingpin nicknamed "El Kilo," was captured last Saturday in connection with the mass graves. According to officials, Estrada is a presumed leader of Los Zetas. The Mexican drug cartel has operated for years in the area of San Fernando.

The investigation in Tamaulipas began after reports of bus passengers in northeastern Mexico being forcibly removed from buses and taken away by heavily armed men.

Another 72 bodies were found in San Fernando last August. They were identified as the remains of Central and South American immigrants on their way to the United States.

Another presumed member of Los Zetas identified as Jose Manuel Garcia Soto was arrested earlier this month as a suspect in the death of U.S. Immigration and Customs Enforcement Agent Jaime Zapata. Zapata and his partner were ambushed in the state of San Luis Potosi while traveling from the northern city of Monterrey to Mexico City. His partner survived.