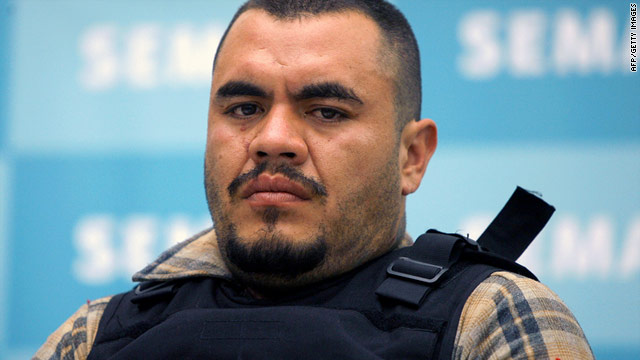 Mexico City (CNN) -- Mexican authorities announced Saturday the arrest of a drug kingpin -- nicknamed "El Kilo" -- based in the country's northeast and suspected of having links to the mass graves recently found in the region.

Security forces have captured Martin Omar Estrada Luna, who is a presumed leader of the Zetas drug cartel in San Fernando, a town in the border state of Tamaulipas, the government said in a statement.

No information was immediately provided on how, when or where he was detained.

Mexico's attorney general had previously identified Estrada Luna as one of three prime suspects behind the mass graves.

Authorities began finding the graves earlier this month during an investigation into a report of the kidnapping of passengers from a bus in late March. The investigation led them to San Fernando -- the same place where in August of last year, the bodies of 72 migrants were found at a ranch.

In the wake of the grisly discovery, the Tamaulipas state governor appointed a new head of public security.

Tamaulipas is one of Mexico's most active states when it comes to drug trafficking. The Gulf cartel and the Zetas cartel operate in the state and have strongholds there.

The Zetas have been blamed for the mass graves and also for the deaths of the 72 migrants found last year. One of its presumed members, Jose Manuel Garcia Soto, was arrested earlier this month and is a suspect in the killing of U.S. Immigration and Customs Enforcement Agent Jaime Zapata.

Nationwide, the Mexican government says there have been some 35,000 drug-related deaths since President Felipe Calderon began a crackdown on the cartels in December 2006.