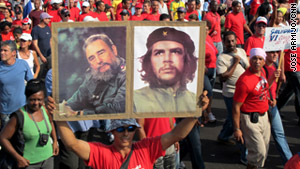 Thousands commemorate the 50th anniversary of Cuba's victory over the U.S.-backed invasion at the Bay of Pigs.

Havana, Cuba (CNN) -- Tanks rumbled through Havana's Revolution Plaza and jets tore through the sky on Saturday as Cuba commemorated its victory over a U.S.-backed invasion at the Bay of Pigs 50 years ago and prepared to hold its first Communist Party Congress in nearly 14 years.

President Raul Castro looked on as thousands of people, both military and civilian, marched through the square, shouting slogans and waving flags.

It was a complete disaster for John F. Kennedy's fledgling administration.

The invading troops failed to take Castro's forces by surprise. The United States never followed through with air cover and Cubans never rose up to join them.

Che Guevara would later thank U.S. diplomats for the invasion, saying it turned an aggrieved little country into an equal.

Saturday afternoon, Cuba turned the focus on its future in a four-day congress dedicated to economic changes.

Castro needs to shore up support for once unthinkable economic reforms that will pave the way for more private businesses and bring massive layoffs to the state sector.

Thousands of Cubans have already taken out new government licenses allowing them to go into business for themselves. Small restaurants and food stalls have cropped up across the island while self-employed gardeners, plumbers and painters have also started offering their services.

Professionals like lawyers, doctors and engineers can still only work for the state.

Party members will also take a look at major reforms to property laws that could allow Cubans to buy and sell their homes. As the law stands now, they can only swap them.