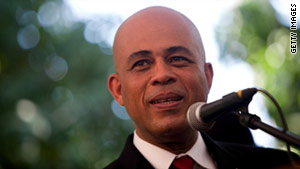 Martelly, 50, took 67.6% of the vote, while Manigat, 70, received 31.5%, according to Pierre Thibault, spokesman for Haiti's Provisional Electoral Council.

After the announcement, streets around the electoral council in Petionville filled with Martelly's spirited supporters, who chanted "Tete Kale," or bald head -- one of Martelly's many nicknames.

Martelly made a name for himself as the singer "Sweet Mickey," who sometimes drank rum straight from a bottle and ripped his clothes off during performances.

But he shed his bad-boy image off-stage to take care of his family and educate his children.

"My life on stage was very different than it was at home," Martelly said last year in the midst of violence after the November election.

In early December, the electoral council announced that Manigat had won but lacked the majority of votes needed for an outright victory. Initial results put her in a runoff with government-backed candidate Jude Celestin.

The third-place candidate, Martelly, claimed he had won more votes than Celestin and a review of results by an Organization of American States team supported that contention.

The runoff vote was held March 20 and unfolded peacefully for the most part amid concerns that the return of former President Jean-Bertrand Aristide, a polarizing figure in Haiti, would disrupt the vote. Aristide arrived in Haiti two days before the runoff but has kept a low profile so far and did not endorse a candidate.

If the preliminary results stand, Martelly will inherit a job laden with challenges as the impoverished country struggles to rebuild after last year's devastating earthquake and a cholera epidemic.

Martelly said in December that Haiti will go nowhere unless the people have a president they can trust, a president who is honest.

"I've been on the ground with them for 22 years," he said of his musical career. "The people know me. I represent the light at the end of the tunnel."