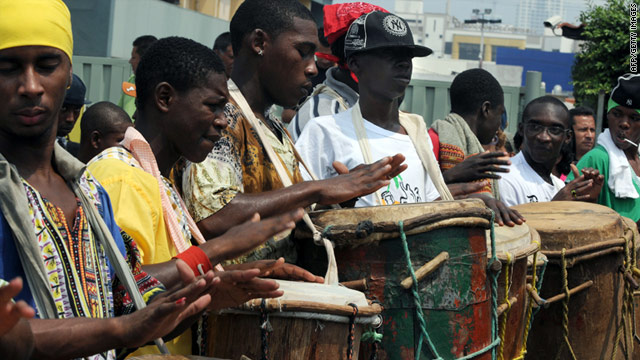 Tegucigalpa, Honduras (CNN) -- Thousands of black Hondurans paraded through the streets of the capital Friday as the country's president pledged to do more to promote and protect their heritage.

About 2,000 Hondurans of African and Caribbean descent -- known as the Garifuna -- came to Tegucigalpa from communities that dot the country's coast for the start of African Heritage Month.

They carried 214 drums with them as they marched through the streets -- demanding respect for their rights and honoring the Garifuna's arrival in the Central American country 214 years ago.

"Today we have been here for 214 years making our firm demands, against government repression of the Garifuna communities, against the invasion of our communities' land by landowners and large foreign projects that have sold our property and demanding intercultural, bilingual education," said Dr. Luther Castillo, a Garifuna activist.

As he kicked off festivities, President Porfirio Lobo announced that he would sign an agreement within six months to give indigenous people and Honduran blacks a preferential right to choose teachers and doctors from their own villages.

Garifuna communities have requested such an allowance, which could bring bilingual education into classrooms that once only taught Spanish.

"This should be a reason for us to reflect in order to have a more cohesive society, without any kind of discrimination, with social justice and opportunities for all," Lobo said.

He predicted that he would be recognized as a defender of the rights of Afro-Hondurans by the end of his term.

Honduras will host a "World Summit of Afrodescendants" in August.

Ana Pineda, the minister of justice, said the Honduran government is concerned about the rights of the Garifuna and other ethnic groups, pointing to the creation of a government ministry of indigenous and Afro-Honduran people as proof.

But activists marching Friday said the government still must do more to recognize their rights.

"The simple act of being this color and speaking the language we speak, we are repressed in this country," university student Keldy Bermudez said. "So we as young Garifuna, we demand our rights to be respected for who we are."

In 2001, the United Nations recognized the language, dance and culture of the Garifuna, who also live in other Central American countries.