Source: Van der Sloot lied about laptop use in killing

From Mayra Cuevas, In Session 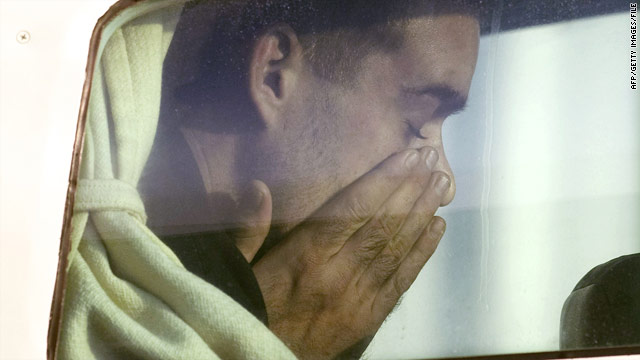 Joran Van der Sloot waits to be flown from Chile to Peru in June 2010 after his arrest in the death of Stephany Flores.
STORY HIGHLIGHTS
RELATED TOPICS

(CNN) -- The laptop belonging to Joran Van der Sloot was turned off the night he is suspected of having killed a young Peruvian woman in Lima, suggesting he lied to investigators when he said he attacked her after she read an e-mail on his computer connecting him to missing American teenager, Natalee Holloway, a source said Friday.

Van der Sloot has been charged with first-degree murder and robbery in the case of 21-year-old Stephany Flores. Authorities found Flores' body in a Lima hotel room registered to him last year.

Surveillance video from the hotel shows Van der Sloot and Flores entering the hotel room together around 5 a.m. on Sunday, May 30. He is seen leaving by himself some three hours later.

Police have said that Van der Sloot admitted he attacked Flores on May 30 after she read an e-mail on his computer connecting him to the Holloway case.

But, according to an analysis of that computer, it was turned off between Saturday, May 29 around 3 p.m. and Sunday, May 30 around noon, a source, who spoke on the condition of anonymity, told In Session.

A police official, meanwhile, said the computer was active, but that nothing done or received during the time period in question would suggest Flores saw information linking Van der Sloot to Holloway. The official, connected to the case, was not authorized to speak publicly about it.

Van der Sloot's attorney, Maximo Altez, said the laptop analysis does not change his defense. His client attacked Flores after she found something on his computer that tied him to Holloway, he said.

"The police can't determine the exact time when Stephany was killed. She was in the room for three days ... Joran didn't mean to kill this woman," said Altez.

Flores' body was discovered on June 2.

Van de Sloot is perhaps best known as the prime suspect in the 2005 disappearance of Holloway in Aruba. He was arrested twice in connection with the case, but was not charged.

Investigators found some files related to the Holloway case on Van der Sloot's computer, but many of them were deleted, the source said.

After killing Flores, police say, Van der Sloot took money and bank cards from her wallet and fled to Chile, where he was arrested June 3. He was returned the next day to Peru and is being held at the Miguel Castro Castro prison in Lima.

Altez recently supplied "In Session" with a copy of a motion he filed last year in support of the manslaughter charge.

"My client ... admits having murdered the victim, but not with ferocity, for profit or pleasure, nor any of the other element(s) that make up this murder, but only by violent emotion that overtook him at the time he was attacked by the victim," the motion read.

Van der Sloot also faces federal wire fraud and extortion charges in the United States, where prosecutors say he demanded more than $250,000 from Holloway's family in return for disclosing the location of her body.