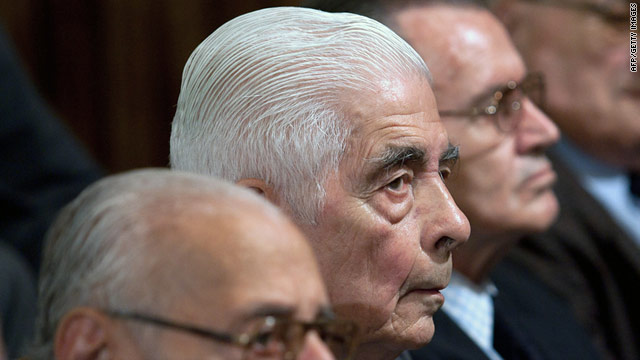 Luciano Benjamin Menendez (C) was sentenced to life in prison for the killing of five people during the dictatorship.
STORY HIGHLIGHTS
RELATED TOPICS

Buenos Aires, Argentina (CNN) -- An Argentine Dirty War-era general has been sentenced to life in prison for the killing of five people during the dictatorship.

Luciano Benjamin Menendez, former head of the Third Army Corps, was already serving a life sentence for violating the human rights of four others.

A panel of judges on the Argentine court handed down the sentence Wednesday.

Sentenced along with Menendez was former policeman Roberto Heriberto Albornoz, who was also sent to prison for life.

Up to 30,000 students, labor leaders, intellectuals and leftists who ran afoul of the dictatorship because of their political views disappeared or were held in secret jails and torture centers during the nation's eight-year Dirty War.

Menendez's most recent trial stems from an army and police assault on a home in Tucuman province on May 20, 1976, according to Argentina's Center for Judicial Information.

A group of Montoneros, an urban guerrilla group, was meeting inside the house before the forces launched explosives and entered the house, the center said. The soldiers and police killed four people inside the house, and also killed one who escaped.