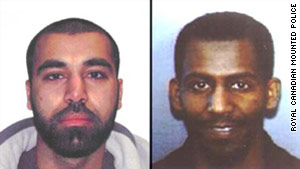 At a news conference in Winnipeg, Canadian police accused Ferid Imam, a former student at the University of Manitoba, of training Najibullah Zazi, the Afghanistan-born New Yorker who has pleaded guilty to trying to bomb the city's subway system.

Imam was identified by the New York plotters as a weapons instructor who went by the name of "Youseff," police said.

"This extensive and thorough national security investigation has provided us with the evidence we require to lay criminal charges," said Bill Robinson, assistant commissioner with the Royal Canadian Mounted Police.

Imam and Yar are now the subjects of an international manhunt that is believed to include the CIA. Canadian authorities said the Canadians left their homes in Manitoba in 2007, bound for Pakistan, in order to train for and carry out terrorist acts against NATO forces in Afghanistan.

Robinson said the investigation is ongoing.

"We continue to work with Canadian border services and domestic and international security partners on this matter," he said.

Canadian authorities confirm to CNN that their Pakistani counterparts provided help to them during the investigation, but they now have no firm leads on the whereabouts of the two men.

"Are they still alive? There's been no proof of life for more than a year," Gilles Michaud, the RCMP's assistant commissioner, told CNN. Police believe the suspects were in the tribal areas of Pakistan about a year ago, but have had no credible intelligence about their whereabouts since then.

Canadian counterterrorism and government officials say the radicalization of these men, and others from North America and Europe represents a true reflection of a small but dedicated group of recruits that pose a direct threat to national security.

"There is no set criteria. It affects all walks of life. These were well-educated, young individuals with no past criminal history and supportive families," Michaud said.

U.S. authorities charged Imam in July with providing material support and receiving military-type training from al Qaeda, according to an indictment unsealed Tuesday in the Eastern District of New York.

Federal prosecutors allege that Imam, while in Pakistan in 2008, helped train Zazi and Zarein Ahmedzay advance of their plot to detonate bombs on subway trains on the eighth anniversary of the September 11 attacks, according to the indictment.

Imam is also charged with use of a destructive device, the indictment said.