Aristide to end exile and return to Haiti before vote, lawyer says 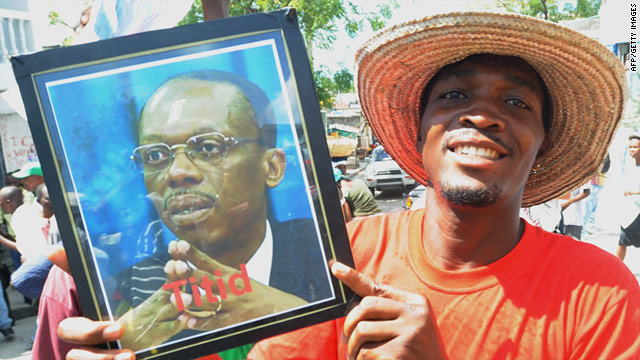 Supporter of former Haitian president Jean-Bertrand Aristide are eagerly awaiting his return to the country ahead of March elections.
STORY HIGHLIGHTS
RELATED TOPICS

(CNN) -- Former Haitian President Jean-Bertrand Aristide will end his exile and return to Haiti within the next week or so, ahead of the country's elections, his lawyer told CNN Saturday.

"He is headed back to Haiti," said Ira Kurzban, Aristide's longtime attorney. "We don't know when yet, but it will be before the elections."

A presidential runoff is scheduled for March 20.

Aristide was Haiti's first democratically-elected president. He was toppled in 2004 after a bloody revolt by street gangs and soldiers and has since been living in exile in South Africa.

The Haitian government issued a new passport to Aristide in February.

According to his lawyer, Aristide is concerned about the perception created by returning to Haiti just days before the election. He is more worried, however, about the possibility of not being able to go back at all after the vote, if the new administration is not receptive to his return and revokes his visa, Kurzban said.

"He wants to go home. He's been in exile for seven years," Aristide's lawyer said. "He wants to get his medical school up and operating given the conditions in Haiti. That's his interest."

Aristide, who was whisked out of the country in a U.S. jet, has claimed his ouster was orchestrated by Western powers. The former Roman Catholic priest, considered by many to be a champion for the poor, remains both a beloved and polarizing figure.

He has often expressed his desire to go home and reiterated that wish in January after former Haitian dictator Jean-Claude "Baby Doc" Duvalier returned to Haiti.

Aristide's return would come at crucial time in Haiti's history.

The Caribbean nation's efforts to recover from a devastating 2010 earthquake have been compounded by a cholera epidemic and political chaos sparked by allegations of fraud in the presidential elections held in late November.