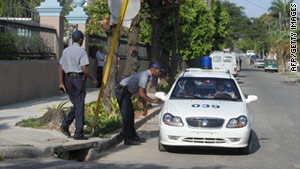 (CNN) -- American contractor Alan P. Gross has been sentenced to 15 years in prison for crimes against the Cuban state.

Gross, 61, was found guilty of working on a "subversive" U.S. project intended to undermine the Cuban government by distributing illegal satellite communications equipment, according to Cubadebate, a state-run website in Cuba.

The United States has said that Gross was helping the island's small Jewish community connect to the internet.

The verdict comes on the heels of last week's two-day trial in Havana. The Cuban prosecution had been asking for a 20-year sentence.

"The Gross family is devastated by the verdict and harsh sentence announced today by the Cuban authorities," defense attorney Peter J. Kahn said in a written statement. "Having already served a 15-month sentence in a Cuban prison, Alan and his family have paid an enormous personal price in the long-standing political feud between Cuba and the United States."

Kahn pledged to "continue to work with Alan's Cuban attorney in exploring any and all options available to him, including the possibility of an appeal." He has called for the contractor's immediate release on humanitarian grounds.

"He has already spent too many days in detention and should not spend one more," Vietor said. "We urge the immediate release of Mr. Gross so that he can return home to his wife and family."

Gross' wife, Judy, attended the trial with her attorney. Three U.S. officials also attended as observers. His mother has recently been diagnosed with lung cancer and their daughter is recovering from a double mastectomy.

Gross has been held at the high-security Villa Marista prison after being detained at Havana's international airport in December 2009.

U.S. Secretary of State Hillary Clinton told reporters Friday that Gross had been "unjustly jailed for far too long."

"He needs to be able to leave Cuba and return home," Clinton said. "This is a matter of great personal pain to his family and concern to the U.S. government."

His detention and subsequent sentencing have brought an apparent standstill to tentative efforts by both countries to overcome years of hostility.

Gross had been working for Development Alternatives Incorporated, a Maryland-based subcontractor that received a multimillion-dollar U.S. contract for democracy-building efforts on the island nation.

He had repeatedly traveled to Cuba using a tourist visa.

"Alan Gross has been accused of doing nothing more than giving peaceful people access to the internet," Boomgard said, adding that his detention has been "without the benefit of due process and in violation of international law."

Boomgard has asked Cuba "in light of the critical medical situation confronting Alan and his family" to release Gross on humanitarian grounds.

Last year, the topic of Gross' imprisonment prompted one of the highest-level diplomatic exchanges between the two countries in recent years.

During the U.N. General Assembly in New York, U.S. Assistant Secretary of State Arturo Valenzuela spoke with Cuban Foreign Minister Bruno Rodriguez in a meeting intended to "encourage the release" of Gross.

Cuba is one of a handful of places -- including Iran and Myanmar -- where the U.S. funds what it calls democracy-building initiatives without the host country's permission.