From Edgar Roman, For CNN 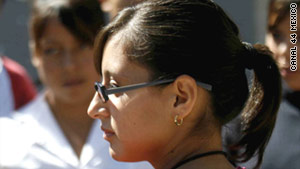 Valles Garcia grabbed international attention last year when she took over the top job in a police force whose officers have been abducted and killed.

Praxedis Mayor Jose Luis Guerrero told CNN that Valles Garcia is on personal leave because her 8-month-old baby is sick. He said she is expected back at work Monday.

"Marisol, in fact, still works here and she's still getting paid. She comes back on Monday," said the mayor.

Praxedis is one of the most violent municipalities in the border state of Chihuahua. It is located about 35 miles southeast of Ciudad Juarez, one of the bloodiest cities in world.

Andres Morales, town secretary in Praxedis, also said reports that Valles Garcia has fled were false. He told CNN she is on leave taking care of her son, who he said is suffering from bronchitis. He called stories about her seeking asylum "unfortunate rumors."

Mexico's El Diario newspaper reported early Friday that Valles Garcia had received death threats and fled to the the United States. It cited Jorge Gonzalez Nicolas, the attorney general for the northern district of Chihuahua, as its source for the report. The newspaper said that she was seeking asylum, attributing that to anonymous sources.

Meanwhile, the news service Agence France-Presse also reported that Valles Garcia had fled to the United States and was seeking asylum. The agency cited an anonymous relative as the source of its report.

A spokesman for the attorney general, Arturo Sandoval, said the El Diario story citing his boss was wrong.

"He did not give a press conference," Sandoval told CNN. "We deny reports that Nicolas said she fled to the United States." The spokesman said he did not know whether Valles Garcia has left Mexico or not.

Guerrero, the mayor in Praxedis, said Valles Garcia is not answering her phone and several of her neighbors told CNN it is an open secret she has fled to the United States. Many said they were afraid to give their names to a reporter, as violence related to drug cartels is rampant in the region.

Last year, Valles Garcia was the only person who accepted the top police job. There was good reason for the fear.

Around the time she took the post, a 59-year-old local mayor, Rito Grado Serrano, and his 37-year-old son, Rigoberto Grado Villa, were killed in a house in which they were hiding in nearby Ciudad Juarez. Another area mayor was killed in June.

Nationwide, the Mexican government says there have been more than 34,600 drug-related deaths since President Felipe Calderon began a crackdown on cartels in December 2006.