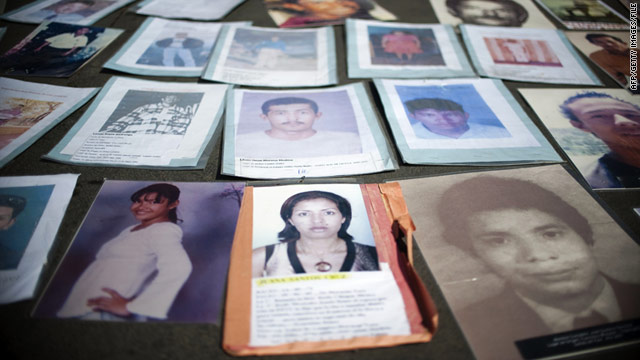 Loved ones of Honduran migrants missing in Mexico laid out their photos in a demonstration in Mexico City last November.
STORY HIGHLIGHTS

(CNN) -- In Mexico, a man who tried to journey illegally into the United States to seek work vows that he will never again leave his home.

His trip turned into a nightmare when he was kidnapped along the route, as happens to thousands of migrants crossing through Mexico each year.

For 17 days, the man recounts, he was held hostage. There were also 17 women among the group, and "each night they came back sadder, more hurt, beaten. I will never forget what I saw," he said.

Each day, between three and five new hostages arrived. There were beatings, and worse.

"Those who didn't pay the ransom were taken outside to, as those scumbags said, 'look at the stars from up close,'" the man said.

The journey across Mexico for those seeking to reach the United States is a treacherous one. People hang on to trains, pay shadowy smugglers, and risk kidnappings like the one the man described.

It's unclear whether the man was released or whether he escaped his captors. But his story is hardly unique.

In a six-month period in 2010, more than 11,000 migrants were kidnapped, the Mexican human rights commission found in a report published this week.

"This statistic reflects that there have not been sufficient government efforts to reduce kidnappings against the migrant population," the report said.

A total of 11,333 migrants were kidnapped in 214 separate incidents, the commission said. That's an average of 52 migrants kidnapped per incident.

The numbers, while staggering, match some news reports of mass kidnappings.

Last summer, 72 migrants who were traveling on the ground in Mexico were shot and killed in the border state of Tamaulipas. The migrants came from Central and South American countries including Honduras, El Salvador, Brazil and Ecuador.

In a separate incident, 50 Central American migrants who were apparently kidnapped in mid-December are still missing. The case was brought to the attention of authorities by Alejandro Solalinde, a Catholic priest who operates a shelter for traveling migrants in the southern Mexican state of Oaxaca.

The human rights commission's findings were based on information requests made to the federal government and all the Mexican states. In 2010, commission personnel made 2,705 trips to gather facts from migrants, both at regional offices and at places where migrants congregate.

In those trips, the organization collected 178 testimonies from victims, and a picture emerged of what victims endure.

Among the findings was that the organized crime groups who carry out the kidnappings sometimes have Central American migrants working with them. In the case of the 72 migrants who were killed, one of the possible motives was that the migrants refused to join the cartel, authorities said.

Those who didn't pay the ransom were taken outside to, as those scumbags said, 'look at the stars from up close.'
--Former kidnapping victim, in testimony to Mexico's Human Rights Commission
RELATED TOPICS

Even specially-designated migrant shelters are not safe, the report found. Some shelters have been attacked by kidnappers who come to chase those who escaped or to find new victims, the report said.

While the ways in which migrants are captured have evolved, their treatment remains the same, according to the report. In short, they are tortured until they give up the phone number of a relative in their home country or the United States, the report said. Once contact is made, the victims are made to tell their families what is necessary to obtain their freedom, the commission found.

Migrants also told the commission that the kidnappers threatened their guides, charging them a fee to cross through their territory. If the guides didn't pay, they were kidnapped, sometimes with the migrants they are guiding, the report said.

The commission "warns that the current migrant kidnapping situation in Mexico reflects a lack of coordinated action between the institutions charged with preventing and combating crimes at the federal, state and municipal level," the report said.

Of the 178 testimonies gathered by the commission, 44% of the victims were from Honduras, 16% Salvadoran, 11% Guatemalan and 10% Mexican. Cubans, Nicaraguans, Colombians and Ecuadorians made up smaller percentages. Nearly 16% of the testimonies came from women.

A majority -- about two-thirds -- of all kidnappings happened in southeast Mexico, the report found. About 30% happened in northern Mexico and a small percentage in the central part of the country.

The most kidnap-plagued states were Veracruz, Tabasco, Tamaulipas, San Luis Potosi and Chiapas.

About one in nine of the migrants interviewed said that authorities colluded with the kidnappers during the incidents.