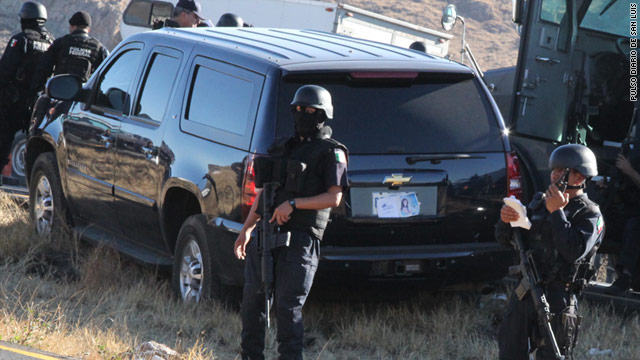 Authorities on Tuesday surround a vehicle attacked by gunmen in Mexico. A U.S. immigration agent was killed, another wounded in the attack.
STORY HIGHLIGHTS
RELATED TOPICS

Washington (CNN) -- Federal officials announced Wednesday the formation of a joint task force to investigate Tuesday's shootings in Mexico of two U.S. immigration agents, one of whom was killed.

The FBI will lead the task force, composed of Justice and Homeland Security investigators.

"The murder of Special Agent Jaime Zapata and the shooting of another ICE agent provide a sad reminder of the dangers American law enforcement officers face every day," Holder said in the release. "Working with our Mexican counterparts, we have already launched an aggressive investigation, and this joint task force will ensure that every available resource is used to bring the perpetrators of this terrible crime to justice."

Zapata died from his wounds; the second agent was shot in the leg and has been discharged from the hospital in the United States where he had been taken, the release said. Earlier, DHS had said he was shot in the arm and leg.

The attack occurred in the north-central state of San Luis Potosi. as the U.S. agents were driving between Mexico City and Monterrey.

The agents were returning to Mexico City after meeting other U.S. personnel in the state of San Luis Potosí, ICE said Wednesday in a news release.

In a telephone call Wednesday with Mexican Interior Minister Fernando Blake Mora, Napolitano said that violence against DHS personnel in Mexico will not be tolerated, the release said.

The Mexican federal attorney general's office dispatched investigators from its anti-organized crime division to the the state.

Senator Joseph Lieberman, I-Connecticut, chairman of the chamber's Homeland Security and Governmental Affairs Committee, called the shootings "the latest reminder of the grievous violence south of our border that must be stopped."

One official said the victims were the first ICE agents to be gunned down in Mexico. According to ICE, the agency has about 30 officers assigned to its office in Mexico City; they work on a range of issues including drugs, weapons, currency and immigration.

Zapata joined ICE in 2006 and was assigned to a Laredo, Texas, office, where he served on the Human Smuggling and Trafficking Unit and the Border Enforcement Security Task Force, according to the statement from ICE Director John Morton. Zapata had been assigned to ICE's Attache Office at the U.S. Embassy in Mexico City.

In Washington, U.S. Border Patrol Chief Michael J. Fisher said the killing drives home the point that agents have to be prepared for all sorts of threats. "We have to be constantly vigilant in our surroundings and how we deploy and make sure the Border Patrol agents, in particular, that are working in remote areas and sometimes alone are trained the best, which I think they are; that they are equipped the best, which we will continue to do, so they can meet those threats and be able to respond accordingly. Because, quite frankly, that's our mission. The American people deserve no less."