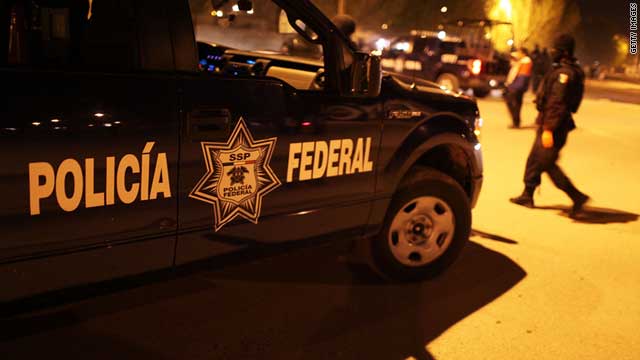 Northern Mexico has been plagued by a steady stream of violence fueled by the lucrative drug trade in Mexico.
STORY HIGHLIGHTS

(CNN) -- The top security official in the Mexican state of Nuevo Leon was found shot dead and burned inside a truck in the city of Monterrey, the state-run Notimex news agency reported, citing state officials.

The governor's office confirmed the death of Homero Guillermo Salcido Trevino, head of the control, command and communications operations for the state police.

He suffered five bullet wounds, and his body was set on fire inside his official truck, officials said. Officials found the body Sunday night.

Eighteen people were killed Monday in Padilla in the neighboring state of Tamaulipas, prosecutors said in a statement.

2010: Closer look at violence in Mexico

Five Padilla residents were among those killed, the statement said, along with six people traveling in the city. Another seven bodies were dumped in the town square, the prosecutors said.

Tamaulipas is in the central northeast of Mexico, bordering Texas and the Gulf of Mexico. Padilla is about 200 miles from the U.S. border.

The state prosecutors said state and local authorities were working the case and pledged cooperation with federal authorities as well.

Northern Mexico has been plagued by a steady stream of violence fueled by the lucrative drug trade in Mexico. According to the government, there have been more than 34,600 drug-related deaths since President Felipe Calderon began a crackdown on the cartels in December 2006.

Alejandro Poire, Mexico's national security spokesman, told CNN's Rafael Romo last week that half the more than 15,000 drug-related deaths last year occured in just three of the country's 32 states -- Chihuahua, Sinaloa and Tamaulipas. Thirty percent of the total is in Chihuahua alone, with most of those in Ciudad Juarez across the border from El Paso, Texas.

"We can get ahold of this violence," Poire said. "We have shown it in other parts of the country, and we will do it because we have a comprehensive strategy to address crime and violence."

On February 6, the remains of five men discarded along the highway between Monterrey and Reynosa in Tamaulipas were found, Notimex reported. The state news agency said the bodies were naked, except for plastic bags.