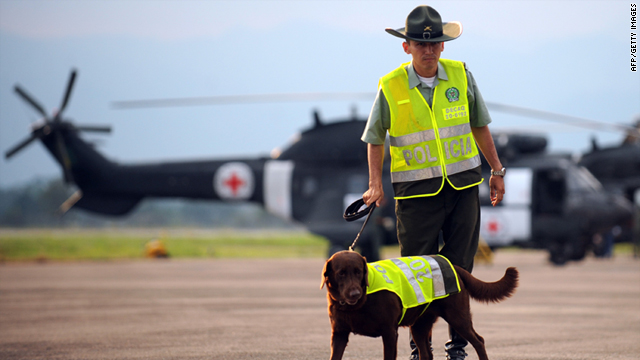 A Colombian police officer with a police dog stands guard next to two Brazilian helicopters with the Red Cross colors at the airport of Florencia, department of Caqueta, Colombia, on Thursday.
STORY HIGHLIGHTS

(CNN) -- A Colombian rebel group is expected to release two hostages Friday, according to a former senator who helped coordinate the humanitarian mission to free them.

"A very productive night, everything is ready for the liberations tomorrow, nobody said that it would be easy, we are not losing hope that together we can weave peace," former Sen. Piedad Cordoba said on her Twitter account late Thursday night.

Marine Henry Lopez Martinez and politician Armando Acuna were scheduled to be released Friday, she said.

They are among a group of five hostages that the FARC leftist guerrilla organization has pledged to release.

Red Cross rescuers are participating in the mission.

Helicopters bearing the organization's symbol flew into the jungle Wednesday to free the first of the group: a councilman from the town of San Jose de Guaviare.

Some have suggested the hostage releases could fuel renewed dialogue between Colombia's government and the rebels.

But news of two more kidnappings by the FARC drew the ire of Colombian President Juan Manuel Santos.

The president said Thursday that he was tempted to call off the rescue mission after learning that two workers from the Carton de Colombia company had been kidnapped in southwestern Colombia Wednesday night.

"We are not going to suspend the liberations, because I do not want to frustrate the excitement and hope of the families of these hostages that are going to be freed, but what I want to say is that this game, this double standard, is totally unacceptable," he said.

Two other hostages -- a police major and a military service member -- are expected to be released Sunday.

The FARC, or Revolutionary Armed Forces of Columbia, have been at war with the Colombian government since the 1960s.

In December, the FARC announced its plans to release the five hostages as a humanitarian gesture.

In its December statement, the FARC criticized Colombia's attorney general for removing and disqualifying Cordoba from serving in the legislature.

The attorney general cited her close ties to the group as the basis for Cordoba's removal from the Senate.