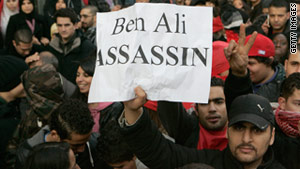 (CNN) -- Family members of the deposed Tunisian President Zine El Abidine Ben Ali are reportedly in Canada, a development now being denounced by some in the Tunisian community there.

French-language media in Canada first reported that as many as 10 members of the Ben Ali family arrived in Montreal by private jet on Thursday.

Canadian Immigration Minister Jason Kenney seemed to confirm their arrival by pointing out that some members of the Ben Ali family have permanent residency status in Canada and therefore have the legal right to enter and stay without a visa.

Privacy legislation does not allow the government to disclose who is in the country.

But Canadian officials also stressed to CNN that Canada would not become a refuge for Ben Ali or his family.

"Mr. Ben Ali, deposed members of the former Tunisian regime and their immediate families are not welcome in Canada. Visas are only issued by our officers when they are satisfied that the individual will leave Canada once the visa expires. Given that members of the regime cannot return to Tunisia, that would be a challenge." said Melanie Carkner, a spokesperson for Citizenship and Immigration Canada.

Permanent residency in Canada can be revoked if it is determined that a person falsely represented themselves, committed fraud or concealed material circumstances when they applied for citizenship or permanent residency.

Still, the fact that members of Ben Ali's family, possibly including his daughter and son-in-law, may have the legal right to stay in Canada did not sit well with some members of the Tunisian expatriate community.

A Tunisian business leader in Montreal who declined to be identified told CNN he believed it was time the Canadian government took a tougher stand with Ben Ali's extended family.

"Even permanent residents shouldn't be protected if they are criminals. And Canada needs to investigate their affairs here. What about freezing their assets?"

There are reports in Canada that the former president's daughter, Nesrine, and her husband, Sakhr El Materi, still own a Montreal mansion that they acquired in 2008 for more than $2 million. CNN could not confirm that the couple still own the property.

In an e-mail, Canada's Foreign Affairs Ministry confirmed to CNN that there are a range of options that allow for assets to be frozen, including through the United Nations, or at the request of a foreign government.

"If there is evidence that assets exist in this country, or if they were acquired illegally, our government will act." said Lynn Meahan, press secretary to Canadian Foreign Affairs Minister Lawrence Cannon.

On Monday, French President Nicolas Sarkozy stressed that his country would track down any assets in France that were stolen during Ben Ali's time in power and return them to Tunisians. A prosecutor in Paris also confirmed that the country was opening an investigation into Ben Ali's French assets.