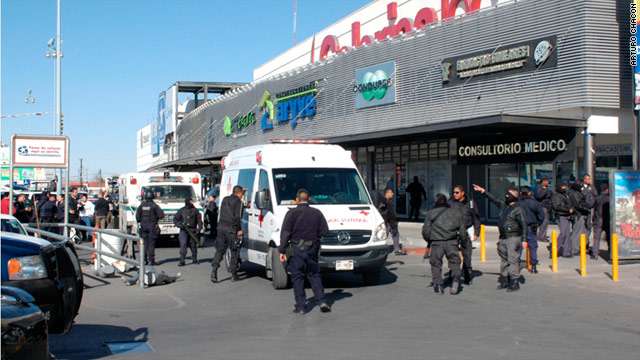 Police investigate the scene where a police officer was shot in Ciudad Juarez, Mexico.
STORY HIGHLIGHTS

(CNN) -- A municipal police officer was shot and killed late Thursday while standing guard at a local government booth inside a mall in Ciudad Juarez, Mexico, police said Friday.

The officer was gunned down by three people who were trying to rob the booth, which is a place where local residents can pay their annual homeowners tax, municipal police spokesman Adrian Sanchez said.

"As of right now, we do not believe this had anything to do with the ongoing drug violence in the city," he said. "The suspects were detained and are being processed."

Photos from the scene taken just after the officer was shot showed mall patrons running for cover. The gunmen ran away, but police caught them, local journalist Arturo Chacon said.

Also, around 4 a.m. Friday, a man who was being chased by gunmen in several cars drove to a municipal police station in Juarez looking for help, Sanchez said, leading to a 15-minute gunfight.

"It would be wrong to say the attack was on the police officers," he said. "An injured man looking for help was being chased, and he came to us. That's when we encountered the gun battle."

No officers were injured, and the shooters fled.

Since October 2010, at least 26 municipal police officers have been killed in Ciudad Juarez, Sanchez said.