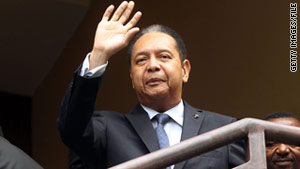 The former strongman stunned the world by returning suddenly to Haiti last Sunday after 25 years in exile in France.

In his first public statement since his unexpected return, Duvalier told reporters he wanted to be in Haiti to help with rebuilding the country after last year's devastating earthquake. He made no mention of any political ambition.

"The desire to participate at your side in this national reconstruction effort is more important than any of the problems I could face. The price to pay is not important. The essential (thing) for me is to be with you," Duvalier said.

He spoke for roughly 10 minutes at a private residence and did not take questions from reporters. Earlier, he was expected to speak at a handful at public locations, but was forced to cancel because the owners of those places did not want him there.

Police escorted Duvalier to court Tuesday, where a judge questioned him for hours. He faces charges of corruption and embezzlement on allegations he stole hundreds of millions of dollars from the national treasury.

But human rights groups have mounted pressure on Haitian authorities to take Duvalier to court on abuse charges.

Ducos said the decision to investigate Duvalier for such abuses is a huge step forward. He said he did not know why Duvalier returned to Haiti but many people have waited many years for an opportunity to prosecute him.

"The state has an obligation to bring him to justice," Ducos said.

He said he met Thursday with Harycidas Auguste, Haiti's chief prosecutor, and Minister of Justice Paul Denis, to discuss the need for an investigation. He said he urged Haitian authorities to ensure that abuse survivors -- including those who fled Haiti -- are given a chance to tell their stories.

Michele Montas, a journalist and former spokeswoman for the U.N. secretary-general, said she endured threats and detention and survived an assassination attempt for her journalism.

The staff at her husband's independent radio station was harassed and the station was shut down during Duvalier's rule, she said. She was expelled from the country in 1980 and returned only after Duvalier's ouster.

Amnesty International researchers collected its information mainly through the testimonies of prisoners, many of whose detentions were never officially acknowledged. The testimonies revealed a pattern of abuse, the organization said.

Journalist Yvens Paul told Amnesty International that he was detained at the Port-au-Prince airport in 1980. He said he was taken to prison, where detectives undressed him and beat him. He said his abusers enjoyed seeing the blood gush from his body. They told him he had been arrested because his radio broadcasts were "subversive."

Frank Blaise, a 70-year-old agronomist, returned home to Haiti from the United States in June 1983 and was arrested two months later and driven by jeep to the Casernes Dessalines army barracks, which the United Nations says was used by Duvalier to interrogate and detain people suspected of anti-government activity.

Blaise told Amnesty International he was arrested for his book on agrarian reform and kept in a dark, damp solitary confinement cell.

Amnesty International's documents tell the experiences of cobblers, taxi drivers, filmmakers, mechanics, distillers and even hairdressers, all of whom, they say, were arrested for anti-government activity.

"Jean-Claude Duvalier was the head of state then," Ducos said. "He shares responsibility for these crimes. He must face justice."