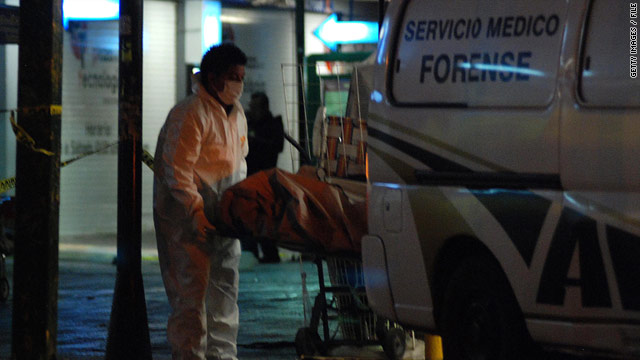 (CNN) -- At least 59 people have been killed in and around the region of Mexico's richest city, Monterrey, since the start of 2011, according to a tally kept by officials at the U.S. Consulate in Monterrey, a spokesman told CNN Tuesday.

"We've been keeping running tabs. Some things are reported, some things aren't, so it's very difficult to keep an accurate record," Monterrey Consulate spokesman Bill Cook told CNN in a phone interview from Monterrey, which rests in Mexico's Nuevo Leon state.

"We've reminded everyone (at the consulate) of the danger," he added.

On Tuesday, authorities announced that five mutilated bodies were dumped about 50 miles south of the city in Montemorelos, a place that has historically been known as a peaceful Seventh-Day Adventist town, according to Cook.

On Monday, 10 people were killed in Monterrey and another eight were killed on Friday, victims in the latest rash of drug-related violence that has spread fear among residents.

Just five years ago, Monterrey was dubbed the safest city in Latin America and the commercial hub of Mexico. Now, it's fallen victim to the lawlessness and violence spreading throughout the country -- a cartel battleground where grenade attacks, shootouts and kidnappings dominate headlines.

The rest of the state has also seemingly been victimized by the violence.

The high-profile killings began in 2010 and continued into the first week of the year. Saul Vara Rivera, 48, mayor of Zaragoza in the municipality of Galeana, Nuevo Leon, was shot 23 times in the back.

The police forces patrolling Monterrey have been impacted too, with at least 12 officers killed since January 1, according to Cook.

"We are on permanent alert because the idea and philosophy that we have taken is to continue cleaning up this process of violence in the state," Monterrey Police spokesman Jorge Domene Zambrano told reporters last month.

Security measures were strengthened in the municipal bodies with support from federal and state forces, especially in Monterrey -- the state capital, he said.

In September, the U.S. State Department issued a travel warning for Monterrey and advised that "the immediate, practical and reliable way to reduce the security risks for all children is to remove them from Monterrey."

The consulate in Monterrey said they are not implementing any added security measures because of the violence, Cook said.

Thelma Gutierrez contributed to this report