Duvalier's millions in Switzerland likely to return to Haiti 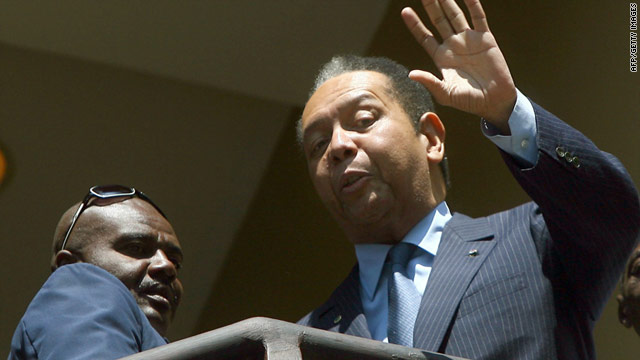 Ex-dictator dictator Jean-Claude Duvalier waves from a balcony at the Hotel Karibe in Port-au-Prince, Haiti, on Wednesday.
STORY HIGHLIGHTS

(CNN) -- The sun had not risen yet on that February day in 1986 when Jean-Claude "Baby Doc" Duvalier's eight-vehicle motorcade of luxury cars and jeeps arrived at the Port-au-Prince airport, then named for his father.

Surrounded by soldiers and about 100 journalists who came to witness the end of an era in Haiti, the dictator boarded a United States Air Force C-141 jet along with his glamorous wife, Michele Bennet, their two children and 20 friends and servants.

Also on the plane that day were trunks of designer clothes, gold, jewels and priceless art. What could not be seen was the hundreds of millions of dollars Haitian officials accused the Duvalier clan of stealing from state coffers.

The pillaging of Haiti's national treasury now lies at the heart of legal action against Duvalier, who stunned the world by returning to Haiti this week from some 25 years of quiet exile in France.

Attorney: Duvalier to stay in Haiti

Some lawyers who have been following the Duvalier money trail for years were flabbergasted that such a man was able to enter Haiti legally, that he was not arrested right away.

"I don't know how a criminal like him goes free," said Enrico Monfrini, a Switzerland-based lawyer who has been representing the Haitian government in a long and drawn out legal battle over Duvalier's cash.

Duvalier reportedly lost a chunk of his wealth when he and Bennet divorced, but the family still has $5.7 million in assets in a frozen bank account in Switzerland that belongs to a family foundation.

"I am optimistic there will be a decision by the end of the year," he said.

The law, which goes into effect February 1, was enacted to help Switzerland overcome existing hurdles with states that have no mutual legal assistance partnership with Switzerland or with troubled nations that are incapable of dealing with such issues, according to the Swiss Foreign Ministry.

For a judge order restitution, a government must prove a discrepancy between the wealth of a "politically exposed person" and his or her earnings, along with high levels of corruption in that country.

"They managed to draft this law very quickly," Monfrini said, adding that legal proceedings in Haiti would not affect efforts at restitution.

He said $5.7 million is not a large amount compared to what Duvalier allegedly stole, but morally, repatriation of the money would be a huge victory.

But not a complete one until Duvalier is made to stand trial for his alleged crimes, said human rights lawyer Mario Joseph, who has worked in Haiti on building the legal case against Duvalier.

Joseph said no one in Haiti ever imagined that Duvalier would return to face charges. His presence in the country has enabled the court to reopen a 2008 case against the strongman, he said.

But Duvalier's lawyer, Reynold Georges, expressed confidence Wednesday that Haitian authorities have little evidence to press charges. Duvalier, said Georges, would not only remain a free man but he could decide to return to politics.

Georges later told CNN that Duvalier had given "all that money" to charity for Haitian relief after the earthquake.

"I don't know if the Swiss bank transferred that money already, so I don't have any details on that," Georges said, "but I guarantee you that that has been done."

Dismayed by the thought of the return of a brutal dictator, Monfrini pressed upon Haiti's justice system to prevail, and for the courts not to forget what Duvalier pledged in the aftermath of Haiti's devastating 2010 earthquake.

He expressed "complete solidarity" with those who were suffering in "these hours of great national distress" and called on Swiss authorities to transfer all of the money from his foundation to the American Red Cross for the relief effort.

Monfrini doubted Duvalier's sincerity but not the new Swiss law.

"This money will go back to Haiti for sure," he said. "It will never go back to Duvalier."