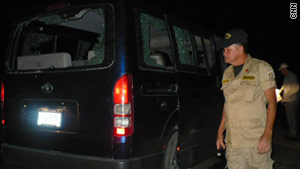 Tegucigalpa, Honduras (CNN) -- Eight people were killed and three others were injured after a group of gunmen opened fire on a private bus in Honduras, officials said.

Photos that firefighters took after the attack showed a woman slumped over, her head on a seat covered with blood stains and shattered glass. Outside the bus, rescuers surrounded a child covered with blood. Body bags sat on the roadside while investigators examined the scene.

The Thursday night attack appeared to target one or two of the people on the bus, which was traveling from the city of Catacamas to the city of Juticalpa, security ministry spokesman Leonel Sauceda said.

Four women and four minors were among those killed, Sauceda said.

"They opened fire without taking into account that there were innocent people inside the bus," Sauceda told CNN affiliate Televicentro.

Federal security officials were on the way to the scene late Thursday to investigate, he said.