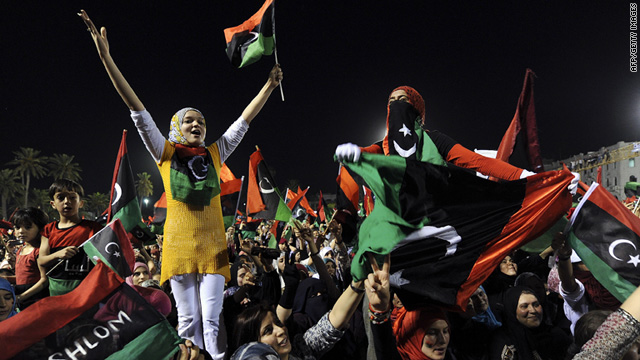 United Nations (CNN) -- The U.N. Security Council unanimously adopted a resolution Friday to establish a support mission in Libya for an initial period of three months and to take other measures to help the country get back on its feet.

The mission's mandate includes restoring public security and order and promoting the rule of law, beginning efforts to write a constitution and set up elections, promoting and protecting human rights, and thawing the assets freeze that had been imposed on the government of ousted leader Moammar Gadhafi.

The resolution further asks U.N. Secretary-General Ban Ki-moon to report on its implementation in two weeks and every month thereafter, or more often if he sees fit.

Resolution 2009 was passed shortly after the General Assembly approved the National Transitional Council to represent Libya at next week's meeting of the U.N. General Assembly.

Such matters are usually adopted by acclamation, but a number of countries, including Venezuela, Cuba, Bolivia, Nicaragua, Angola and Gabon, denounced the recognition of the NTC as Libya's representative and forced the entire assembly to vote.

U.S. Ambassador Susan E. Rice said the United States welcomes the council's decision to modify the sanctions it imposed on Libya seven months ago, when Gadhafi forces were cracking down on peaceful demonstrators.

"As a result, the Libyan authorities will be able to re-energize the Libyan economy while some measures are kept in place to ensure that previously frozen funds are released in a transparent and responsible way -- as the situation normalizes and the transition proceeds -- and are released in the interest of the people of Libya," she said.

She expressed hope that the council would adopt further resolutions to support Libyans emerging from "many years under one of the world's most brutal dictatorships."

France's permanent representative, Gerard Araud, told reporters that it was up to the NTC to decide how long NATO forces should continue working to protect Libyans. "We won't stay if the National Transition Council or the government is asking us to stop," he said.

Obama has called for a meeting on the margins of the General Assembly to address the future of Libya.

CNN's Richard Roth and Mick Krever contributed to this story.