Libya's interim leader promises to build 'a state of law' 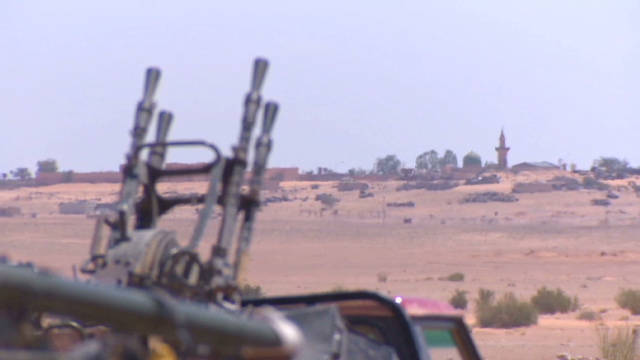 Tripoli, Libya (CNN) -- Libya's interim leader promised to build "a state of institutions, a state of law" Monday during his first public address from Tripoli.

"We aim to establish a state of law, a state of welfare, a state where Islamic Sharia law is the main source of legislation," said Mustafa Abdel Jalil, chairman and head of the National Transitional Council (NTC). "This matter requires several things, primarily unity of classes and non division and the soul rejection of hatred and envy -- not taking law into your own hands."

Jalil spoke to supporters in Tripoli's Martyrs Square, previously known as Green Square. His speech was significant as it was his first public address.

"We need a state of institutions, a state of law, a state of welfare and we will not allow any extremist ideologies from the left or the right," he said.

Jalil was justice minister under ousted Libyan leader Moammar Gadhafi before defecting to join the opposition in February.

Saadi Gadhafi on a 'mission'

The head of the NTC spoke the same day Gadhafi vowed to "kill until victory" in a purported message read by an anchor at the Syria-based television station Al-Rai.

Al-Rai, a privately owned station that has, in recent weeks, taken over for Libyan state media in fulfilling a role as Gadhafi's mouthpiece, had previously reported that it would air a message from the former leader.

Because of security concerns, the station decided to delay the broadcast of the purported video, the anchor said. Instead, he read a statement that Al-Rai attributed to Gadhafi.

"Libyan people have no option but to defeat the coup attempt against the revolution. We cannot surrender our land to the French people so that they may enjoy it. And we cannot become subjects after we were rulers in local committees and local meetings," the ousted leader allegedly said.

"We cannot surrender Libya to imperialism once again like the agents/spies want us to now. So we have no option but to kill until victory and to destroy this attempted overthrow," Gadhafi was reported to have said.

Bani Walid, home to a powerful tribe loyal to Gadhafi, is one of three major towns still in the hands of those loyal to the ousted leader.

A large convoy of troops left the front after arguing with another group of fighters from Bani Walid, who insisted they alone take the lead in fighting to take the town, witnesses told CNN's Ben Wedeman.

Pushing and shoving also broke out among the fighters, some of whom wanted the media to leave the area.

"What ensued was pushing, shoving, shouting," said Wedeman, who watched the incident unfold. "Rocks were picked up. There was some rifle butting, and then one of the fighters manning a truck mounted a 14.5 (mm) anti-aircraft gun and opened fire in the air to restore order."

Similar incidents have been reported during the months-long war, raising concerns about a lack of discipline and leadership among the ragtag group of fighters and the possible threat such issues could pose to the country's stability.

Negotiations are under way with bands of fighters to bring them under the control of the council, said Mahmoud Jibril, chairman of the NTC executive committee.

Jibril called the move a strategic measure that would restate the legitimacy of the NTC, saying it would bring "all the brigades and revolutionaries under the umbrella of the NTC."

But Anees al-Sharif, a spokesman of the new Tripoli military council, said the plan was "unacceptable."

"We will not accept Jibril's authority over us," he told CNN.

Some residents of the town, meanwhile, were fleeing. One man, who identified himself as Abu Farook but did not want to provide his last name for fear of retribution, arrived at a checkpoint about 20 kilometers (12 miles) outside Bani Walid on Monday, accompanied by his wife and children.

"There are around 700 Gadhafi forces scattered around Bani Walid and another 150 in the center of the city," he said. "Most of them have sniper rifles, and heavy artillery is positioned between houses in residential areas. These forces are the ones who fled from Tripoli the last days of the fall of Tripoli and have blood on their hands."

In addition, Abu Farook said, there are African mercenaries inside Bani Walid. He said there are no communications, no electricity and no running water. Food is running out for residents, he said.

He said NTC fighters are not inside Bani Walid, but on its northwest outskirts in the Manasla and Douwara neighborhoods, still about 10 kilometers (6 miles) from the city center.

Abu Farook said firing and explosions have taken place for 10 days, but he could not flee until Monday. He said his nephew was killed by a sniper bullet Sunday while standing near him.

The man's 7-year-old son, in the car, said he was scared by all the fighting and loud explosions.

Jibril also announced that a transitional, governing executive committee will be created within 10 days and will include representatives from across Libya, including areas of the country still under siege.

"A transitional government will be formed once all of Libya is liberated," Jibril said.

The creation of the executive committee comes as Jibril said Libya has begun producing oil again.

He said oil production began Saturday, though he would not disclose the location because of security concerns. He said additional production is expected in other areas.

"Soon, we will begin the production of oil and gas in the western area," he said.

There was an explosion Monday on the outskirts of Tripoli at an ammunition storage facility in the Qasser Bin Ghashir area near Tripoli International Airport, said NTC spokesman Jalal El Gallal. People were transporting the ammunition to another location when the blast occurred, he said.

The explosion "was an accident due to the mishandling of some ammunition," said Ihmidan Almagari, a field commander and military spokesman. Some mortars and rockets went off in the blast, he said, and two people suffered minor injures.

Also Monday, forces loyal to Gadhafi attacked an industrial complex housing an oil refinery at Ras Lanuf, according to Gallal. The loyalists did not enter the refinery itself, as a battle ensued and NTC fighters held them back, he said.

The NTC said in a statement that 17 "brave fighters" were killed during the attack, which did not damage the refinery. It was not immediately clear whether there were any pro-Gadhafi casualties.

In Tripoli, U.S. State Department officials allowed some media limited access to the American Embassy, which was vandalized by Gadhafi supporters May 1.

A CNN crew on Monday saw three buildings that had been burned and ransacked. In one building, the ambassador's office was stripped.

The supporters spent 38 hours in the embassy, carrying out a rampage, according to a State Department official.

The embassy was evacuated in February, and no classified or sensitive information was left behind. On the night of the attack on the embassy, only five guards were left to protect the compound, and they fled.

A U.S. diplomatic team is evaluating whether the embassy can be renovated or repaired, or whether a new embassy will have to be built.

News of the pending production of oil and gas in Libya was tempered by word that one of Gadhafi's sons, Saadi, escaped Libya to Niger.

Saadi spoke to CNN's Nic Robertson on Monday. The son said he was in Niger on a humanitarian mission to check on the situations of Libyans who fled the fighting. He wants to negotiate with the NTC, Saadi told CNN.

The son was accompanied by eight ex-Libyan officials, "of minor importance compared to Saadi," according to Niger Justice Minister Marou Amadou.

"As usual, Niger accepted them on (a) humanitarian basis," he said.

In Washington, a U.S. State Department spokeswoman said officials in Niger are either in the process or have already taken Saadi to the capital and intend to detain him.

"The government of Niger, as it did with the previous members of the regime, has made clear ... that it is prepared to cooperate with the Libyan Transitional National Council on the disposition of these people," Victoria Nuland said.

Moammar Gadhafi's wife, two of his sons and other relatives fled recently to Algeria, which also said it had acted on humanitarian grounds in accepting them.

The whereabouts of the elder Gadhafi are not known.

At least three Libyan convoys have entered Niger recently, carrying generals, family members and low-ranking Gadhafi regime personnel, according to officials in Niger. Initial speculation suggested that Moammar Gadhafi had been in one of those groups, but that does not appear to be the case.

Asked whether Saif al-Islam Gadhafi was thought to be inside Bani Walid, Abu Farook said, "We don't know for sure." However, he said, Gadhafi spokesman Musa Ibrahim was thought to be in the town, staying in a house near the city center that is surrounded by snipers on top of buildings.

China was the latest nation to recognize the NTC as Libya's ruling authority and representative of the Libyan people, the Chinese state-run Xinhua news agency reported Monday. Other nations and organizations, including Russia, the United States and the European Union, have already done so.