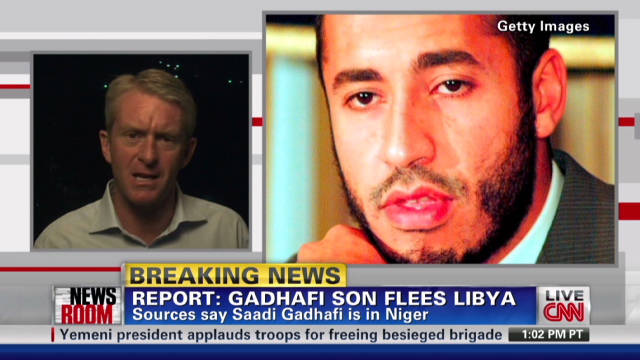 Waddan, Libya (CNN) -- Saadi Gadhafi, a son of ousted Libyan leader Moammar Gadhafi, has arrived in Niger, an official said, as Libyan fighters tried to stamp out the last pockets of the former leader's loyalists.

"As usual, Niger accepted them on (a) humanitarian basis," he said.

Moammar Gadhafi's wife, two of his sons and other relatives fled recently to Algeria, which also said it had acted on humanitarian grounds by accepting them.

Earlier this month, Saadi Gadhafi told CNN he was "a little bit outside" of Bani Walid, southeast of Tripoli, but had been moving around.

He said then that he had not seen his father or brother, Saif al-Islam Gadhafi, for two months. He said he is "neutral" and not on his father's side or that of the rebels, but remains "ready to help negotiate a cease-fire."

At least three Libyan convoys have entered Niger recently, carrying generals, family members and low-ranking Gadhafi regime military and security personnel, according to officials in Niger. Initial speculation suggested that Moammar Gadhafi had been in one of those groups, but that no longer appears to be the case.

Dead Libyans given to medical workers

The whereabouts of the ousted Libyan leader are not known.

Libya has also started to produce oil again, according to the chairman of the NTC executive committee. Mahmoud Jibril declined to tell reporters where, but added that he expects Libya to restart production in the western part of the country soon.

He also said leaders are in serious talks to form a new transitional government that would include members from across Libya, including areas of the country still under siege. The interim government will be created within 10 days, he said.

Also Sunday, Libyan fighters trying to defeat the last of Gadhafi's loyalists worked to isolate his hometown, a day after hold-outs repelled an effort by the new authorities to dislodge them from another town.

NTC troops are patrolling areas south of the city of Sirte to try to cut off supplies of pro-Gadhafi forces still controlling his birthplace.

They're sweeping areas and towns south of Sirte to make sure other pro-Gadhafi towns are not able to relieve it.

The new authorities arrested eight or nine men manning a pro-Gadhafi post but are not finding significant numbers of fighters still loyal to the old regime.

Sirte remains firmly in loyalist hands, and the tribal leaders have refused to surrender the town to the National Transitional Council.

NATO continues to strike military hardware held by Gadhafi loyalists. On Saturday it hit anti-aircraft guns, a tank, armed vehicles and other targets near Sirte, Waddan, Sebha and Bani Walid, it said Sunday.

NTC fighters were regrouping outside Bani Walid Sunday, preparing for another assault after encountering stiff resistance from troops still loyal to the ousted Libyan leader.

Fighting raged there Saturday after negotiators failed to work out a deal to surrender the city.

NTC forces don't know how many Gadhafi loyalists are in the stronghold, though they believe they are heavily armed, Abdulrahman Busin, an NTC spokesman, told CNN. Two of Gadhafi's sons -- Saif al-Islam and Mutassim -- have been previously reported to be in the town.

The intense fighting forced some NTC troops to withdraw, and left one calling for NATO warplanes to clear the way for them into the city.

"Where are you, NATO?" shouted one fighter, as one of the cars carrying NTC forces was forced to turn back.

NATO confirmed its aircraft were operating Saturday near Bani Walid, though it would not confirm whether warplanes were targeting loyalists in the city.

"We do not coordinate attacks with the NTC. If they pull back -- as a military person -- that would make sense in terms of soldiering," the office of Col. Roland Lavoie, a NATO spokesman, told CNN.

The NTC said it wanted to negotiate the surrender to prevent further bloodshed and destruction, though critics believe talks would give Gadhafi's fighters more time to entrench themselves within the town.

Sticking points in the negotiation included the demand by Gadhafi loyalists for blanket pardons, NTC fighters to enter their communities unarmed and refrainment from searching houses, the NTC said.

Bani Walid is one of the three cities in Libya that remain in the hands of Gadhafi loyalists.

Opposition fighters were working to surround the loyalist stronghold of Sabha, some 400 miles south of Sirte. It is located on a main artery to Algeria, Chad and Niger, which have been friendly with the Gadhafi regime.