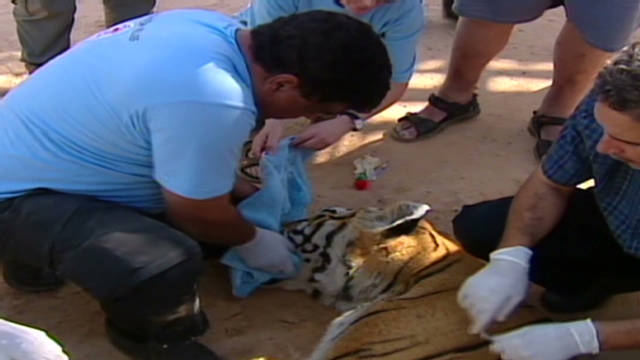 Tripoli, Libya (CNN) -- In a city slashed by war, a tiger fights for life.

Osama, a Siberian tiger at the Tripoli Zoo, has been suffering for days. He is on his side, breathing shallowly, his huge paws motionless -- caramel, black-and-white-striped fur covered with flies that he is too weak to brush off.

A team of animal-welfare experts from Austria's Four Paws International gently rolls the tiger over and Dr. Amir Khalil, dripping sweat, searches for a vein, then puts in an IV drip to give the animal vitamins.

Asked why the tiger is so sick, the veterinarian replies, "Honestly, we don't know but I believe he's old, 21 years. That's number one. Number two, it was a lot of stress in the surroundings here."

During the struggle for Tripoli, gunfire raged just outside the zoo. When the fighting was at its height some Libyans packed up their cars and fled. The animals at the Tripoli Zoo didn't have that option. The deafening sounds of shooting, the acrid smell of battle -- there was no respite for these sensitive creatures.

Shells still litter the zoo grounds. As the zoo's director, Dr. Abdulfatah Husni, leads a CNN crew to the mammal house, he points out bullet casings on the sidewalk. "This is for Kalashnikov. You know Kalashnikov?" he asks, referring to automatic rifles.

In the mammal house, the roof is marred by a a gaping hole blasted by a rocket propelled grenade. Luckily, no animal died or was injured.

For two weeks there was no water in much of Tripoli. For the hippos at the zoo, it was a disaster.

The huge, stolid animals stand forlornly by their almost-empty pool, now slowly being filled with water from a large hose. Husni says that during the worst of it, the animals had to drink whatever water remained but they could not swim, as they usually do. The staff had to sprinkle them with what water remained to keep their tough skins moist.

Even as fighters shot it out on the streets near the zoo, 15 members of the staff came in every day to feed and water the animals, risking their own lives; if they hadn't, many of the animals would have died within three to four days, Husni says.

In the tiger house, meanwhile, the animal rescue team still struggles to save Osama the tiger. Dr. Khalil rushed here from Vienna to help after seeing CNN reports about the fate of these animals. He grows more quiet as his efforts seem to have little effect.

"He's finished," he finally whispers, acknowledging that the tiger has died. "It was too late."

The Tripoli Zoo, originally opened in 1986, was under major reconstruction when the revolution broke out. Without the fighting, it was scheduled to be completed in May. But the South Korean construction company working on the project pulled out because of security concerns, Husni says.

He hopes the project will continue and says the new anti-Gadhafi transitional leaders pledge to give the zoo support.

There will be exchanges with zoos around the world, he says, something that stopped during the Gadhafi regime. He will be able to attend conferences around the world, to learn new techniques of protecting animals in captivity. And, he predicts, the zoo will welcome new animals unscarred by war.