U.S.: Gadhafi not believed to be in Niger convoy 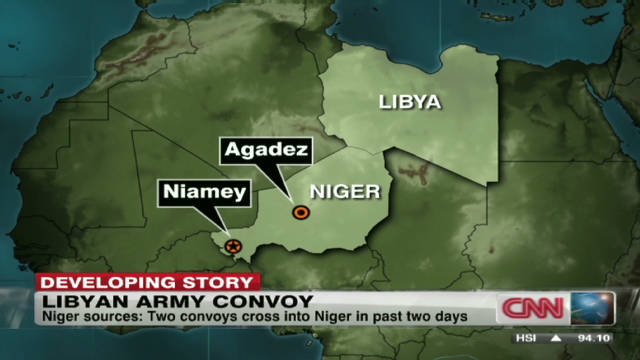 Tripoli, Libya (CNN) -- Two Libyan convoys have passed through Niger this week, officials in that country said Tuesday, fueling renewed speculation about the whereabouts of ousted Libyan leader Moammar Gadhafi and members of his family.

The U.S. State Department said it viewed the two sets of vehicles as parts of a single convoy -- and that Gadhafi is not believed to be on it.

"Apparently a convoy has entered and it does include some senior members of the Gadhafi regime, but we do not believe that Gadhafi himself was among them," department spokeswoman Victoria Nuland said.

One convoy was on its way Tuesday to the capital, Niamey, a military captain in Niger said.

Another convoy reached Niamey a day earlier, an official with Niger's Interior Ministry said. That convoy included six high-ranking Libyan officials close to Gadhafi, including Gen. Mansour Daw, the source said. Daw is said to be the head of the Revolutionary Guard and is responsible for the security of Gadhafi and his family.

The sources did not want to be identified because neither is authorized to speak to the media.

U.S. Defense Secretary Leon Panetta said officials believe Gadhafi is on the run. "I don't have any information as to exactly where he's located," Panetta said.

Bisa Williams, U.S. ambassador to Niger, spoke with that country's government about the convoy, Nuland said.

"We have strongly urged the Nigerien officials to detain those members of the regime who may be subject to prosecution, to ensure that they confiscate any weapons they have found and to ensure that any state property of the government of Libya -- money, jewels, etc. -- also be impounded so that it can be returned to the Libyan people."

Williams told the Niger government that the United States expects it to comply if the new Libyan government requests anyone seeking refuge in Niger to be returned to Libya, State Department officials said.

Niamey is in Niger's southwest corner, near Burkina Faso.

Burkina Faso's government said Tuesday that it has not offered Gadhafi asylum, contrary to news reports.

If Gadhafi were to enter the country, Burkina Faso would "respect our obligation in the context of the International Criminal Court," said government spokesman Alain Edouard Traore.

Gadhafi, his son Saif al-Islam Gadhafi and the former head of military intelligence, Abdullah Al-Senussi, face charges in the court at The Hague for crimes against humanity related to the regime's violent crackdown against anti-government protesters. The court issued warrants for their arrests.

Niger and Burkina Faso are signatories to the Rome Statute, meaning they recognize the court's authority.

In August, Burkina Faso's foreign minister, Yipene Djibril Bassolet, announced his country was recognizing the rebels' National Transitional Council as Libya's government. When asked what would happen if Gadhafi came to the country, Bassolet responded that Gadhafi could come, but that the government would respect its obligations with the International Criminal Court, Traore said.

The African Union has called on its member states -- which include Burkina Faso -- to refuse the International Criminal Court arrest warrants. In July, the AU called on the U.N. Security Council to activate Article 16 of the Rome Statute, which prevents any investigation or prosecution for a year.

The AU argued that the court's arrest warrants seriously complicated efforts to find a negotiated political solution in Libya.

Traore told CNN that despite the AU position, Burkina Faso would "respect our obligation in the context of the ICC."

An AU representative could not be reached immediately Tuesday.

Gadhafi has historically been a strong supporter of the African Union and has channeled large sums of money its way.

Traore said Gadhafi was not in Burkina Faso and that the government was not expecting him and doesn't know where he is.

"We believe that Saif al-Islam Gadhafi was part of that convoy," Kenshil said.

NATO said Tuesday that while it "continuously receives reports" about weapons, vehicles and even convoys of vehicles moving throughout Libya, "we do not discuss the intelligence and surveillance information we collect."

"To be clear, our mission is to protect the civilian population in Libya, not to track and target thousands of fleeing former regime leaders, mercenaries, military commanders and internally displaced people," a NATO official said in an e-mailed statement.

On Monday, Gadhafi spokesman Musa Ibrahim told Syrian al-Rai TV by phone that Gadhafi was "in excellent health" and that "no one will be able to know where he physically is."

Elders who were negotiating with representatives of the transitional leadership returned to Bani Walid and reportedly were fired upon and cursed by pro-Gadhafi elements inside. They were forced to leave, said Mahmoud Abdel Aziz, spokesman for the National Transitional Council in the area.

As far as the council is concerned, negotiations have ended, Aziz said. The council no longer believes the problem can be solved peacefully.

The council worries that those in Bani Walid who were willing to negotiate could be killed, Aziz said.

Earlier, chief negotiator Kenshil said people in Bani Walid did not need to worry that the council would harm or kill anyone if they drop their weapons. He added that the NTC made clear there will be no retribution for residents of Bani Walid and that the new leadership of Libya will respect property rights.

Kenshil said rebels believe there are "several big fish" from the Gadhafi regime in Bani Walid.

For more than six months, Libyans have demanded democratic reforms and an end to Gadhafi's 42-year rule. The unrest exploded into a civil war, and Gadhafi's regime crumbled after anti-Gadhafi fighters stormed the capital of Tripoli in late August.

Gadhafi's wife, two sons and other relatives fled to Algeria recently, deepening mistrust between the new Libyan leadership and its neighbor. Algeria has said it acted on humanitarian grounds.