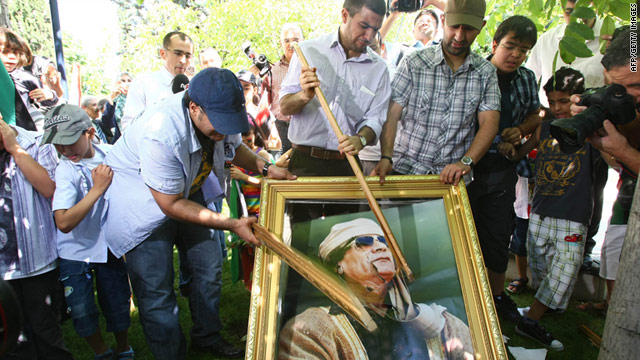 Demonstrators smash a portrait of Moammar Gadhafi during a protest outside the Libyan embassy in Turkey on August 22.
STORY HIGHLIGHTS

Istanbul (CNN) -- The cash-starved Libyan rebel government received emergency money in the final weeks before their advance into Tripoli -- a $100 million cash donation from the government of Turkey.

During a hastily-arranged trip to the Libyan rebel capital of Benghazi this week, Turkey's foreign minister Ahmet Davutoglu and the Transitional National Council chairman Mustafa Abdul Jalil revealed that starting in July, the Turks began rushing a total of $300 million to the rebels.

"The cash they are using (is) for salaries and buying food," Unal added.

On Thursday, diplomats will converge in Istanbul for a meeting of the Libya Contact Group, a coalition of Arab and European governments. Representatives from the United States and Turkey will also attend.

Many of these governments threw their weight behind the Libyan rebels by freezing the assets of Libyan leader Moammar Gadhafi's government and pledging military and financial support to the council in Benghazi.

"The group will discuss the next steps to be taken at the political level," said Unal. "It will be no surprise if they also discuss the financial aspect of the crisis."