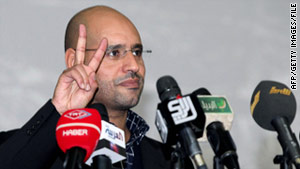 Saif al-Islam Gadhafi, one of the longtime Libyan's leader sons, has been acting as the de facto prime minister.
STORY HIGHLIGHTS

(CNN) -- The chief prosecutor of the International Criminal Court spoke Monday with members of the National Transitional Council about efforts to safeguard the civilian population in Libya, the court said in a statement.

Further conversations will discuss the possibility of surrendering to the court three people alleged to have committed crimes before and since the rebel uprising, it said. The court has issued arrest warrants for longtime Libyan leader Moammar Gadhafi; his son Saif al-Islam Gadhafi, who has been acting as the de facto prime minister; and Abdullah al-Senussi, head of military intelligence.

"Crimes in Libya were primarily committed against Libyans," Prosecutor Luis Moreno-Ocamposaid. The arrest warrants issued June 27 against the three men are for "some of the most serious crimes of concern to the international community as a whole."

Where are Gadhafi's assets?

Where is Moammar Gadhafi?
RELATED TOPICS

Moreno-Ocampo said the younger Gadhafi's arrest was "very important" for the war-crimes court, which issued the warrant for his arrest on charges of crimes against humanity.

"We'll discuss tomorrow the transition of authority, how to manage to surrender him," Moreno-Ocampo said.

Both Gadhafis are wanted for crimes against humanity in connection with their attempts to put down the emerging revolt against Gadhafi's four-decade rule in February. The court, based in The Hague, Netherlands, issued a similar warrant for Abdullah al-Sanussi, the elder Gadhafi's brother-in-law and Libya's intelligence chief.

With rebel forces inside Tripoli, the whereabouts of neither the Libyan leader nor his aide were known publicly.

Saif al-Islam Gadhafi was one of two of the Libyan leader's sons reported captured Sunday. A spokesman for the rebel National Transitional Council said Saadi Gadhafi, a businessman and onetime soccer player, was also arrested.