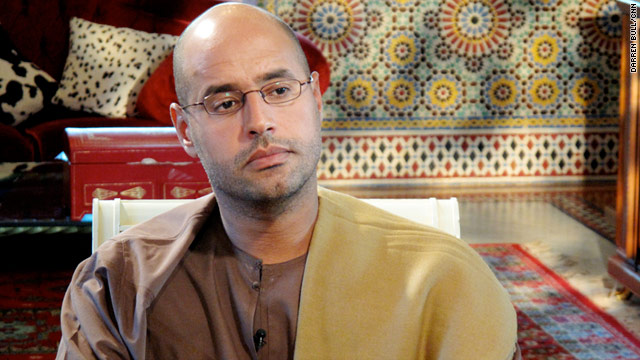 Saif al-Islam Gadhafi is wanted for crimes against humanity in connection with attempts to put down the revolt in February.
STORY HIGHLIGHTS
RELATED TOPICS

Moreno-Ocampo said the younger Gadhafi's arrest was "very important" for the war crimes court, which issued a warrant for his arrest in June on charges of crimes against humanity.

"We'll discuss tomorrow the transition of authority, how to manage to surrender him," Moreno-Ocampo said.

Both Gadhafis are wanted for crimes against humanity in connection with their attempts to put down the emerging revolt against Gadhafi's four-decade rule in February. The court, based in The Hague, Netherlands, issued a similar warrant for Abdullah al-Sanussi, the elder Gadhafi's brother-in-law and Libya's intelligence chief.

With rebel forces pushing into Tripoli over the weekend, the whereabouts of neither the Libyan leader nor his close aide were known.

Saif al-Islam Gadhafi was one of two of the Libyan leader's sons reported captured Sunday. A spokesman for the rebel Transitional National Council said Saadi Gadhafi, a businessman and onetime soccer player, was also arrested.