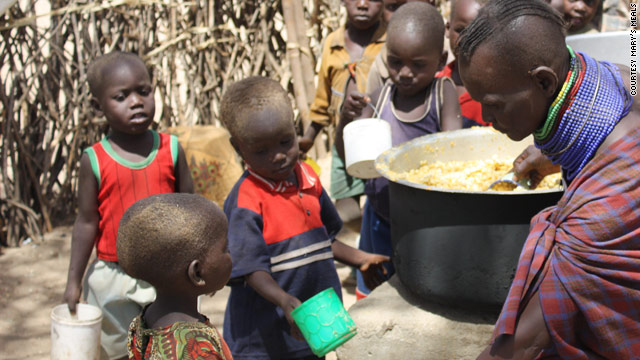 (CNN) -- Millions of people are suffering in the drought-ravaged Horn of Africa, but help is on the way thanks to relief groups from around the world.

One of them, Mary's Meals, is focused on the youngest victims of the crisis. Founded by Magnus MacFarlane-Barrow, a 2010 CNN Hero, the organization is providing food to 24,000 children a day in northern Kenya.

Danielle Berger: Your group was already working in the region before this crisis unfolded. How have you seen the situation evolve?

Over the last two or three years, we've seen the situation ... worsen steadily because of the lack of rains. It's become harder and harder for parents there to feed their children. Most of their animals, which they depend completely on, have now died. 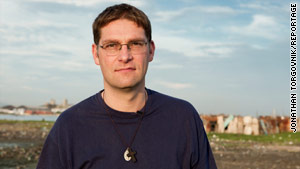 Magnus MacFarlane-Barrow, the founder of Mary's Meals, was a Top 10 CNN Hero in 2010.

We have a real crisis, a real situation of life and death facing those people and children. Because of that, we are trying desperately to expand our program to reach more children at risk, and we will do that as funds allow us to.

We've already grown the program to reach a further 6,000 children every day during this period. And we will stay committed to feeding those children as long as this current crisis remains. We are all hoping desperately the rains will come in October, but there is no guarantee of that.

Berger: How has the drought impacted people there, beyond the need for food and water?

MacFarlane-Barrow: The plight of the people is just desperate.

Some of the mothers of the children we fed in Turkana, recently ... crossed over the border into Ethiopia to barter the beautiful necklaces that they make. ... On their way back from doing that, having got food for their children, they were ambushed by a neighboring tribe with which they'd been in conflict for many years. Around 40 or 50 women lost their lives.

Berger: As someone who works every day to save impoverished children, how does a situation like this make you feel?

MacFarlane-Barrow: The pictures that we see on television of the suffering in the Horn of Africa, it just fills you with horror and shame really that that's happening today: in our world of plenty, our children are still starving to death.

And, I'm sure like so many people, my desire is just to do something about that -- to do whatever we can do to save the lives of those children. And, at the same time, to build something better and help those communities escape from reliance on aid and escape from these situations in the future.

Berger: What changes have you seen for Mary's Meals since you were recognized at "CNN Heroes: An All-Star Tribute" last year?

MacFarlane-Barrow: Many new people have made contact with us from all over the world, wanting to be part of Mary's Meals, wanting to help us provide daily meals for children in schools. That's resulted in lots more support and ultimately allowed us to feed many more of the world's hungriest children.

I think at the time of the show last year, we were feeding around 460,000 every day. That figure now has risen to around 560,000 ... (in) places like Malawi and Liberia and Haiti. We are now providing meals in West Africa also.

The whole focus and mission of Mary's Meals is about meeting the immediate needs of the hungry child by providing them a meal in a place of education -- so that we draw them into our schools or nurseries in the belief that education can be their ladder out of poverty. On average, we can feed a child for an entire school year for $15.

In (Malawi and Liberia), we are rolling out a program in primary schools to reach hundreds of thousands more children. And it's wonderful to watch in both those countries how many children are coming to school for the first time because of those daily meals.

To donate to Mary's Meals, visit its website at www.marysmealsusa.org. To read the original story about MacFarlane-Barrow, visit his archive page at CNNHeroes.com.