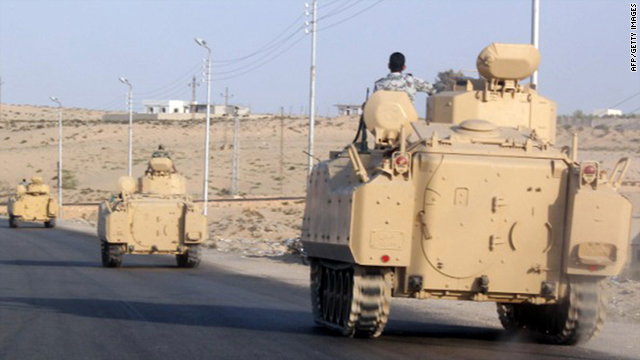 A convoy of Egyptian armoured vehicles head along a road on the Sinai Peninsula near the Gaza border on August 13, 2011
STORY HIGHLIGHTS

Cairo (CNN) -- The Egyptian army and police are cracking down in an "anti-terror" operation in the Sinai area of Egypt, state-owned media reported on Tuesday, as reports emerge of Osama bin Laden's doctor surfacing in the area.

One person was killed and 12 were arrested on Monday, the first day of the operation, said Hazem al-Maadawi, a police officer involved in the offensive.

Citing an unnamed security official, state news agency EgyNews said authorities are targeting 15 more people who participated in attacks at an el-Arish police station -- some of whom are members of the extremist Jaish el-Islam group, which is affiliated with al Qaeda.

The crackdown comes amid new developments on the whereabouts of a bin Laden associate.

Ramzi Mahmoud Al Mowafi, the doctor of the late al Qaeda leader, escaped from a Cairo prison during the Egyptian revolution earlier this year and has resurfaced in the country's North Sinai area, an official said.

"Al Mowafi, also known among his fellow Jihadists as the 'chemist,' escaped from a maximum security prison in Cairo on January 30 while serving a life sentence," Maj. Yaser Atia from Egyptian General Security told CNN Monday. According to prison records, Al Mowafi was sentenced to life for a "military case" -- but more details were not immediately known.

Bin Laden's longtime personal doctor and an explosives expert, Al Mowafi was born in Egypt in 1952. He left for Afghanistan to join al Qaeda, according to the data listed in his prison records.

"Al Mowafi was seen in Sinai by several Jihadist(s) according to witness testimonials," Gen. Sameh Seif Al Yezen said. "I know he is very dangerous and that he had set up his own laboratory in Tora Bora with bin Laden. A full report will be published on this matter in the upcoming week."

A general in Egypt's intelligence service, who did not want to be identified because he is not authorized to speak with the media, told CNN that "Al Mowafi surfaced in el-Arish and communicated with several 'terrorists' from the Egyptian Takfir wal-Hijra and the Palestinian Islamic Army."

The general added, "Al Qaeda is present in Sinai, mainly in the area of Sakaska close to Rafah."

For neighboring Israel, the lack of state authority in Sinai is becoming a source of anxiety.

Israeli Prime Minister Benjamin Netanyahu told a Knesset committee recently that Egypt was having difficulty exercising its sovereignty over Sinai.

"What's happening in Sinai is that global terrorist organizations are meddling there and their presence is increasing because of the connection between Sinai and Gaza," Netanyahu said.

Since the beginning of the revolution, the gas pipeline running through el-Arish used to export gas to Israel has been bombed five times by unidentified men. Several police officers were kidnapped and killed in recent months, but no group has claimed responsibility for the attacks.

On July 29, several dozen people were demonstrating outside the al Nasr mosque in el-Arish after Friday prayers.

Mohamed Mahmoud, who was among the protesters, recalled what happened that day. "The Takfiris stormed in by the hundreds mounted on pickup trucks and motorcycles waving black flags, a symbol of Jihad," he told CNN from a safe house not far from el-Arish. "The militants were heavily armed with machine guns, hand grenades and rocked-propelled grenades."

The head of security in North Sinai, Gen. Saleh al Masry, told CNN that Takfir-wal-Higra had become active during the revolution that led to the ouster of President Hosni Mubarak.

"The terrorists were joined by members of Palestinian factions, and they are currently being questioned by military intelligence. We arrested 12 assailants, including three Palestinians," al Masry said.

"The investigation resulted in troubling information. Al Qaeda has been funding and recruiting cells in Sinai including members of the Takfir wal-Hijra joined by Palestinians from the Islamic Army," Atia said.

Mohamed Younis, one of the tunnel operators, told CNN, "I charge $50 to smuggle them in for trade purposes in coordination with Hamas on the other side. After the attack we have banned any Palestinians from coming through. We are trying to bring peace to the area and don't need trouble."

Gen. Abdel Wahab, the governor of North Sinai, confirmed that a flier titled "Al Qaeda Sinai Branch" circulated outside a mosque in el-Arish on Wednesday. The document called for an Islamic state in Sinai and announced that the group was planning attacks on the police stations and security forces last Friday.

The Egyptian military presence in the demilitarized zone in Sinai under the Camp David Agreement signed in 1978 between Egypt and Israel raises many questions.

"Under the accords of the agreements, parties may increase forces in the restricted zones if there is national threat with the coordination among both parties. In this case Israel was informed and the forces will remain there for a time agreed upon by both countries, that may be also extended until the situation is dealt with," said Al Yezen, a military analyst. "This operation serves the interest of Israel too and ensures the safety of its borders," he added.