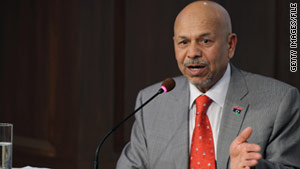 Ali Aujali, former Libyan ambassador to the U.S., was formally accredited Thursday as the head of the Libyan mission.
STORY HIGHLIGHTS
RELATED TOPICS

Washington (CNN) -- The Libyan Embassy in Washington officially re-opened Thursday under the control of the Transitional National Council, a senior State Department official and the new Libyan ambassador told CNN.

Ali Aujali, the former Libyan ambassador to the United States, was formally accredited Thursday as the head of the Libyan mission.

"This is a message that Gadhafi can no more rule Libya," Aujali said in a phone interview. "The recognition of this embassy under the leadership of the TNC is a clear message to the regime the U.S. recognizes the council and they recognize the new Libya."

Calling the re-opening of the embassy "a great day for Libyan-American relations," Aujali said "the Libyan people appreciate this very much."

The move also allows Aujali to regain control of the embassy's frozen bank account, worth about $13 million. Aujuli said he talked with State Department officials Thursday about the Obama administration's efforts to help the TNC gain access to some $30 billion in frozen Libyan assets.

In March, the State Department ordered the embassy closed and expelled diplomats loyal to Libyan leader Moammar Gadhafi. Aujali had resigned his post as the regime's ambassador to the United States in February and has since represented the opposition in Washington.

The United States on July 15 recognized the rebel movement based in Benghazi as Libya's rightful government.

The re-opening of the embassy comes amid internal strife in the rebel movement. Libyan Transitional National Council Chairman Mustafa Abdel Jalil has dismissed the rebels' 14-member executive board following the death of the rebel government's military commander, Gen. Abdel Fattah Younis, on July 28. But concerns have been raised that the mysterious assassination of Younis might have been carried out by feuding rebel groups.

NATO has been bombing Libya for more than four months under a U.N. mandate to protect civilians from troops loyal to Gadhafi. The U.S. Embassy in Tripoli was shuttered and American personnel evacuated by sea and air in late February after the revolt erupted.

Libyan and U.S. officials held face-to-face talks in Tunisia last month, but Washington says the sole point of the meeting was to repeat its demand that Gadhafi "must go."