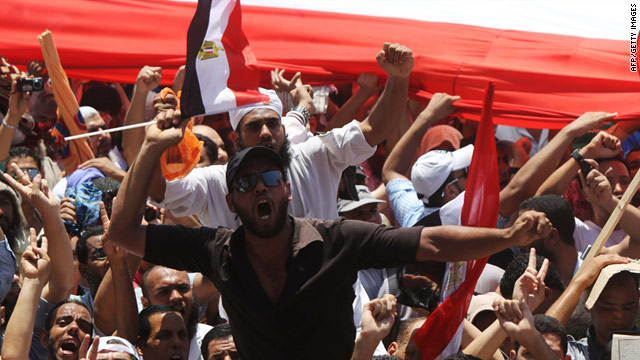 Egyptian Salafists rally in Cairo on July 29, 2011. They are in conflict with the more radical group, Takfir-wal Higra.
STORY HIGHLIGHTS

El Arish, Egypt (CNN) -- The town of el Arish in Egypt sits on the clear blue waters of the Mediterranean, its fine beaches lined by palm-trees. Developers have built luxury resorts close to this town of about 100,000 people.

But in the aftermath of the Arab Spring, el Arish is becoming known for something far different from tourism. A well-armed jihadist group is making its presence felt on the dusty streets here, intimidating opponents and demanding Egypt becomes an Islamist state.

On a scorching hot day late in July, several dozen people were demonstrating outside the al Nasr mosque in el Arish after Friday prayers. They were Salafists - conservative Islamists who want Egypt governed according to Islamic law. But not conservative enough for members of the Takfir-wal Higra - a group sympathetic to al Qaeda's goal of establishing an Islamic Caliphate.

Mohamed Mahmoud, who was among the protestors, recalls what happened that day. "The Takfiris stormed in by the hundreds mounted on pickup trucks and motorcycles waving black flags, a symbol of Jihad," he told CNN from a safe house not far from el Arish.

"The militants were heavily armed with machine guns, hand grenades and rocked-propelled grenades," he said.

"They attacked two police stations and scared the residents under the name of Jihad. We only call for Jihad if someone attacks our Islamic country or people," added Mahmoud.

The head of security in North Sinai, General Saleh al Masry, told CNN that Takfir-wal-Higra had become active during the revolution that led to the ousting of President Hosni Mubarak.

"The terrorists were joined by members of Palestinian factions and they are currently being questioned by military intelligence. We arrested 12 assailants including three Palestinians," General al Masry said.

"I guarantee there is no al Qaeda presence in Sinai but the Takfiris are in the thousands," he added.

"They are definitely organized but we have not identified their Emir or leaders yet. There is a possibility he may have been released among those granted amnesty during the revolution," Al Masry added.

But at least some of them appear to identify with al Qaeda.

One flyer distributed to residents of el Arish calling for an Islamic state was labeled: "A statement from al-Qaeda in the Sinai Peninsula."

It described Islam as the only religion of truth and goes on to criticize the Camp David agreement which led to the peace treaty between Egypt and Israel.

"I was handed this paper by one of the men who covered their faces with scarves during the protest," Ahmed Amr told CNN.

Seven people were killed in clashes that Friday - including civilians, police and army officers and one Palestinian.

Dozens of injured people were taken to El-Arish hospital - as were two of the dead, including a Palestinian who appears to have been among the Takfiri.

The manager of the hospital morgue, Iraqi Mohamed, told CNN that three men with their faces covered stormed into the morgue and retrieved the body of the dead Palestinian.

"They had a Palestinian accent so I did not resist them," he said.

For neighboring Israel, the lack of state authority in Sinai is becoming a source of anxiety. The gas pipeline from Egypt to Israel that runs through Sinai has been sabotaged several times this year.

Israeli Prime Minister Binyamin Netanyahu told a Knesset committee recently that Egypt was having difficulty exercising its sovereignty over Sinai.

"We saw this in the two gas pipe explosions that occurred there," Netanyahu said. "What's happening in Sinai is that global terrorist organizations are meddling there and their presence is increasing because of the connection between Sinai and Gaza."

Gaza is run by radical Palestinian faction Hamas and in the last year or so has seen the emergence of several hardline Salafist groups that associate themselves with al Qaeda.

Palestinians have arrived in El-Arish in growing numbers since the Egyptian government opened the frontier crossing with Gaza some 40 kilometers away.

Many of them arrive legally - looking for a better life away from the poverty and tension in Gaza. But a few appear to be linked with Takfir-wal Higra.

Mohamed Younis, one of the tunnel operators, told CNN: "I charge 50 dollars to smuggle them in for trade purposes in coordination with Hamas on the other side. After the attack we have banned any Palestinians from coming through. We are trying to bring peace to the area and don't need trouble."

Takfir-wal Higra was founded by Shukri Mustafa in the 1970s as a splinter group of the Muslim Brotherhood. Its austere philosophy included isolation from society and rejection of the Egyptian state. In many ways it was in line with the views of the current al Qaeda leader Ayman al Zawahiri, who was then a radical Islamist trying to overthrow the Egyptian state

To discover more about Takfir-wal Higra I was taken by Bedouin smugglers to an area called Wadi Amr, just two kilometers from the Israeli border. I agreed to be blindfolded for the drive, which took an hour across the northern Sinai desert.

I was escorted to a tent where two heavily bearded Sheikhs identifying themselves as Abu Abdulla and Abu Mohamed sat on the floor surrounded by armed men.

"This is the first time we speak to a journalist because we want our correct message to reach the masses through foreign media, not our state-run agencies," said Abu Abdulla.

"We don't kill innocent women and children and we only carry arms to defend ourselves. The Egyptian government has tortured us and killed members of our tribes in cold blood for years. Thanks to the revolution we are now free and the truth must prevail through the true Islam."

"Al Qaeda's Al Zawahiri, and bin Laden's higra or flight to fight in Afghanistan is totally acceptable Jihad for the sovereignty of a Muslim country attacked by the infidels."

But he said the group had been vilified by the Salafists.

"The Salafis outright hate us because we do not relate to their methods. They will tell you we drink alcohol, shave our heads and beards to infiltrate Westerners and kill infidels, but this is not right," he said.

"We follow the beliefs of Prophet Muhamed as a movement that will only bear arms to support the next Caliphate of Islam," Abu Abdulla said.

Whatever their intentions and beliefs, the Takfiris' new-found organization and audacity in Sinai adds another dimension to Egypt's many troubles.