In Tripoli, Libyans prepare for Ramadan 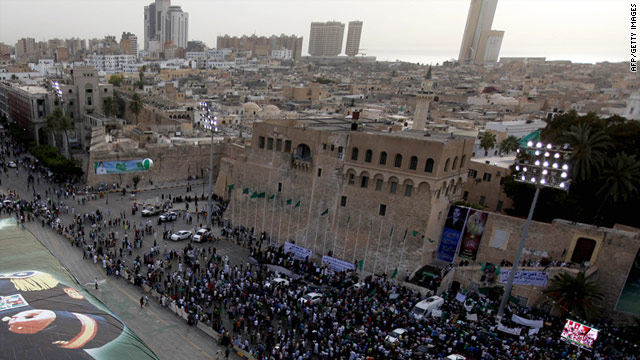 This photo of Tripoli was taken during a guided government tour on July 22 during a pro-Col. Moammar Gadhafi rally.
STORY HIGHLIGHTS

Tripoli, Libya (CNN) -- Last-minute shopping before the start of the Muslim month of Ramadan brought back bustle and commercial activity to the center of a city that is increasingly showing strain from Libya's grinding civil war.

In downtown Tripoli, cars were backed up in traffic jams. Shoppers lined up outside a bakery waiting for bread. Not far away, another line of residents stood next to an ATM machine, waiting for their turn to withdraw cash.

The busy scene on Sunday was a sharp contrast to previous government-sponsored tours of the city, which revealed rows of shuttered shops and streets largely devoid of traffic.

Asked about how the civil war is likely to impact the imminent month of fasting and feasting, many Tripoli residents insisted they were not facing any hardships whatsoever.

"Everything is good," she added, as she shopped with her sisters and nieces for food. "Everything is available and at cheap prices ... we are hoping for victory for our leader (Moammar Gadhafi)!"

However, when a government guide was out of earshot, a Libyan man had a dramatically different assessment of the situation.

"We're barely staying alive," said the man, who spoke discreetly and asked not to be named, due to what he claimed were large numbers of secret police and security forces operating in the immediate vicinity. "Haven't you seen the fuel lines?"

Long lines of parked cars snake through the city next to gas stations, where drivers sometimes wait days to buy gas. Huge piles of garbage have started to accumulate on streets, parks and beaches due to the departure of armies of guest workers who often fulfilled basic municipal duties. A gleaming, recently constructed Marriott hotel stands empty on one of Tripoli's sea fronts, a symbol of the burst of foreign investment that was frozen after the conflict erupted last February.

The NATO-enforced blockade of seaports and airports controlled by Gadhafi's forces have severely disrupted trade, forcing Tripoli to rely largely on food and fuel trucked in from neighboring Tunisia.

Earlier in July, the United Nations published a report warning about "pockets of vulnerability" in Tripoli and other Gadhafi-controlled cities. A U.N. humanitarian team reported seeing shortages of cash, medicine, and fuel.

The besieged Gadhafi regime has acknowledged the growing hardship.

In an interview several weeks ago with CNN, the finance and planning minister in Tripoli announced his government had begun pumping in "large amounts of funds" to drive down growing war-time prices of basic consumer goods like rice, flour, meat, eggs, sugar and edible oils.

These measures appear to have helped Libyans preparing for a month of fast-breaking iftar feasts.

"Everything we need is available. There has been a slight increase in prices, very small increase," said an elderly retired engineer named Milad Omar.

Harder to evaluate is the impact the conflict is having on the collective Libyan psyche. Regime officials strictly control the movements and conversations of foreign journalists. And after 42 years of strict Gadhafi rule, Libyans often appear visibly uncomfortable speaking openly about their situation.

But on a recent visit to the market in Tripoli's central Abu Salim neighborhood, CNN journalists met two families who said they had recently fled fighting in the nearby Nafusa mountains to the southwest of the capital.

"We woke up to shelling," said Mabouka Hassem. Her town of Al Josh came under attack from rebel fighters on Thursday morning, she said. "We never expected it. Our neighbors who live in the hills above us attacked us."

Hassem said she and her sister and their children fled crying and screaming, some barefoot. They arrived in Tripoli on Friday.

"We left with only the clothes on our back," said Nuri Mohamed Ali, a man who said he fled with his children from Gawalish, another front-line town, two weeks ago. He walked through the market with two of his children, shopping ahead of what is supposed to be a month focused on faith, spirituality and reflection.

Officials in Tripoli have been preparing for what they say will be a bloody Ramadan.

At a recent gathering in support of Gadhafi, a Muslim cleric told CNN that loyalist troops would be authorized to break their daytime fasts to fight on the front lines.

"Those who are fasting, if they get thirsty they should break their fast. (Because) those who are fighting are Mujahedeen (holy warriors)," said Mohammed Madani Chouairef.

"Everyone standing up to this sedition is a Mujahed except for those who are with NATO."

"It is very bad to fight against other Muslims during Ramadan," said Moussa Ibrahim, Gadhafi's main spokesman. "But it (Ramadan) makes us stronger," he added.