Libyan PM: airstrikes must stop before talks can be held 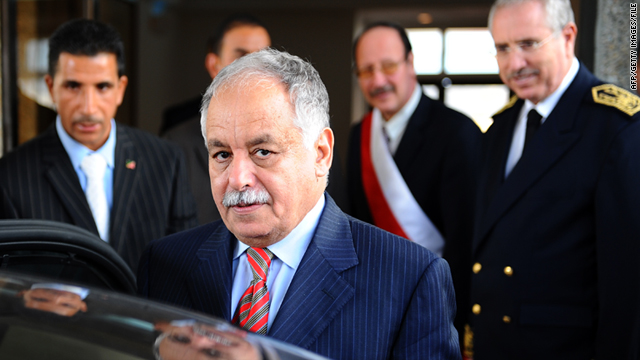 Tripoli, Libya (CNN) -- Libya's prime minister said Tuesday that NATO airstrikes must stop before any negotiations to resolve the five-month-old conflict can begin.

His statement came as the United Nations reported that a visit to the country by the secretary-general's special envoy to Libya found the government and the rebels "far apart on reaching agreement on a political solution."

Prime Minister al-Baghdadi al-Mahmoudi, speaking to reporters in Tripoli, said that "this aggression must stop immediately."

"A cease-fire is a must before we can be able to have any sort of dialogue or solution to the Libyan problem," he said.

The prime minister spoke after meeting with the U.N. special envoy, Abdul Ilah al-Khatib, who had met the day before with members of the Transitional National Council in the rebel stronghold, Benghazi.

Al-Mahmoudi reiterated the regime's public stance that the future of Libyan leader Moammar Gadhafi is not negotiable.

"He is the leader for whom Libyans have nothing but love and respect, and all voices demanding the leader to leave as such should be silenced by these masses of people coming out to the streets expressing their views," he said.

In recent days, the Tripoli government has organized what it describes as "million-man marches" in which crowds vowing allegiance to Gadhafi took part.

The premier argued these rallies, to which journalists have been taken by government officials, show that the people support Gadhafi as the "legitimate leader" of Libya.

"We believe that the Libyan population have made itself very clear: They are not negotiating the future of the leader," he said.

But rebels battling government troops have shown no sign of letting up in their fight to oust Gadhafi, who has ruled the African nation for nearly 42 years.

On Monday, the United Kingdom became the latest Western government to soften its position, with Foreign Secretary William Hague saying Gadhafi could remain in Libya if he leaves power.

In response to a question on Hague's remarks, al-Mahmoudi said Gadhafi's future would be decided only by Libyans.

"With all due respect to the foreign minister of Great Britain, he cannot decide on behalf of the Libyan people," al-Mahmoudi said. "What is important to us is what Libyans decide, not what William Hague decides."

In his meeting with the U.N. envoy, al-Mahmoudi said he and al-Khatib discussed the U.N. Security Council resolutions regarding Libya and what al-Mahmoudi described as "serious violations" by NATO.

NATO has consistently denied such claims by the Libyan regime and says it targets only military targets used by the regime to threaten and attack civilians.

The United Nations issued a statement Tuesday saying al-Khatib, in his meeting with the prime minister, urged Libyan authorities "to engage in a political process leading to a political solution that meets the legitimate demands and aspirations of the Libyan people."

"The prime minister reiterated previously stated positions with respect to NATO bombing and against Colonel Gadhafi stepping down," it said.

Al-Khatib "said it is clear from the discussions in Tripoli today and in Benghazi yesterday, with representatives of the Libyan Transitional National Council, that both sides remain far apart on reaching agreement on a political solution. The two sides reaffirmed, however, their desire to continue to engage with the United Nations in the search for a solution to the crisis," the United Nations said.

Al-Mahmoudi, who described his meeting with al-Khatib as productive, said they also discussed the humanitarian situation in Tripoli. He said the capital is facing shortages of fuel, medicine and basic commodities.

The prime minister said NATO's sea embargo and freezing of regime funds have contributed to the shortages.

The United Nations released a report Monday on the humanitarian situation in the capital, based on last week's visit by an inter-agency team to Tripoli.

In the report, the United Nations said the health sector, which is under strain due to the ongoing conflict, is also running low on medical supplies. Vaccines "are rapidly running low," it said.

With less than a week before the Muslim fasting holy month of Ramadan begins, the United Nations voiced concerns about the city's food supplies.

"Although basic food commodities can be found in the markets, prices are increasing," the report said. "There are also concerns over the unsustainable food supply chain for the public distribution systems, especially as Ramadan approaches and the conflict persists."

One of the most visible signs of the impact the conflict has had on civilians in regime-controlled areas like Tripoli has been long lines for fuel, with some stretching for miles.

Garbage has been piling up in Tripoli's streets, parks and public squares, another sign that the five-month conflict is taking its toll even in the Libyan capital. Residents tell CNN that residents of some Tripoli neighborhoods have taken to organizing their own volunteer groups to clean up trash.

Until street protests against the government erupted in many towns and cities last February, Libya relied on hundreds of thousands of foreign "guest workers" in many sectors of the economy. The protests, and the subsequent bloody crackdown by state security forces, triggered a mass exodus of foreign workers, leaving hospitals, hotels and, apparently, municipal clean-up crews short-staffed.

Meanwhile, at a pro-Gadhafi forum in Tripoli on Tuesday afternoon, the Lockerbie bomber appeared on Libyan state television. Abdelbaset Ali al Megrahi was the only person convicted over the 1988 bombing of Pan Am flight 103, which killed 270 people. He was released from a Scottish prison in 2009 on the grounds that he had cancer and was not likely to live more than three more months.

Appearing frail, in a wheelchair and with a facemask under his chin, he was introduced to the rally as a victim of a conspiracy.

"God helps those who have fallen victim to oppression," said the man who introduced him. "We have an example sitting in front of us -- he has fallen as a victim to colonialists. He has fallen victim to the world. Half of the world was against him. He is Abdel Bassit al Megrahi. He was a victim and was freed by Libya's good grace. Let us greet him and say 'You are welcome along with your tribal brothers.'"

CNN's Richard Roth at the United Nations contributed to this report.