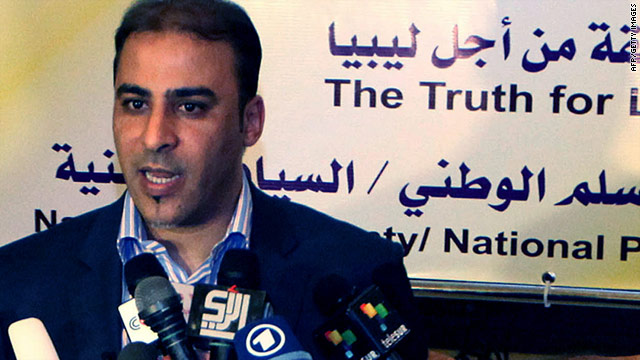 Libyan government spokesman Musa Ibrahim would not name the officials who participated in talks over the weekend.
STORY HIGHLIGHTS

Tripoli, Libya (CNN) -- Libyan and U.S. officials say the two governments held face-to-face talks in Tunisia over the weekend, but Washington says the sole point of the meeting was to repeat its demand that Libyan leader Moammar Gadhafi "must go."

"We are ready to discuss ideas to move forward, make sure that people are not harmed any more, that this conflict comes to an end and that the damaged relationship between Libya and the (United) States and other NATO countries can be repaired," Ibrahim said.

But in Washington, a U.S. official familiar with the meeting said the purpose of the meeting was "for us to convey directly that Gadhafi must go." And a senior State Department official called the three-hour session in Tunis "a one-time meeting to send a clear message," not the start of negotiations.

NATO has been bombing Libya under a U.N. mandate to protect civilians from troops loyal to Gadhafi, who is battling a rebellion that has claimed control of the eastern half of the country. Libyan officials had been reaching out to Washington with increasing frequency in recent weeks with no response, said the State Department official, who briefed reporters on condition of anonymity.

After Friday's announcement that the United States would recognize the rebel movement based in Benghazi as Libya's rightful government, the official said the Obama administration wanted to tell the Libyans face-to-face what it has been saying publicly: that Gadhafi must go.

Ibrahim said in June that Libya would not consider a peace initiative that would require Gadhafi to step down.

The State Department official said talks involved three American envoys and four Libyan officials. One of the Americans was the U.S. ambassador to Libya, Gene Cretz.

Cretz was recalled from Libya in December amid the disclosure of embarrassing U.S. diplomatic cables published by the anti-secrecy website WikiLeaks. The U.S. Embassy in Tripoli was shuttered and American personnel evacuated by sea and air in late February, after the current revolt against Gadhafi erupted.

CNN's Ivan Watson and John King contributed to this report.