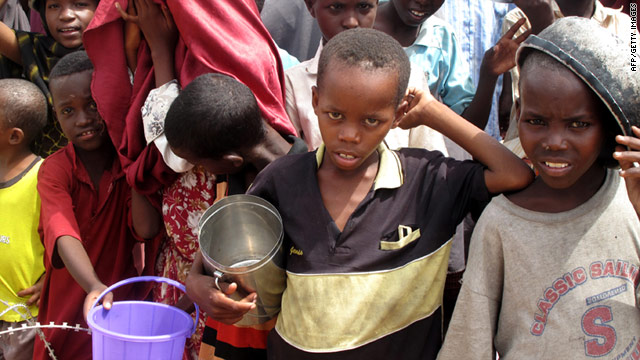 (CNN) -- The United Nations airlifted emergency supplies to help children in southern Somalia after Islamist rebels pledged to lift an aid ban they had imposed in areas under their control in the war-ravaged nation.

In the long term, however, a senior U.S. official is expressing deep doubt that the Al Shabaab Islamist rebel group will allow foreign humanitarian aid groups back into the region over the coming weeks and months.

Somalia is battling its worst drought in 60 years, sending scores walking for days to neighboring Ethiopia and Kenya in search of food and water.

Earlier this month, al Qaeda proxy Al-Shabaab pledged to lift a ban and allow aid agencies in areas under rebel control to avoid a humanitarian disaster.

The al Qaeda proxy banned foreign aid organizations from operating in the country in 2009, accusing them of being anti-Muslim.

The United Nations Children's Fund said it has delivered aid to limited areas by road during the ban, but was not able to airlift supplies until late last week.

Emergency nutrition supplies and water-related equipment was airlifted to Baidoa in southern Somalia, the group said in a statement. The south is home to about 80% of the nation's malnourished children, UNICEF said.

Deliveries Thursday included medicine and equipment to supply clean water in Baidoa, according to the U.N.

In addition a series of emergency airlift flights arrived in Kenya Sunday, bringing tent material for the Dadaab refugee camp at the Kenya-Somalia border.

Doctors from the African Union Mission in Somalia are treating measles, malaria and diarrhea in a displaced persons' camp in Mogadishu that holds 700 people. Many, particularly children, show signs of severe malnutrition and say they have walked for up to five days in search of food, a statement from the group said.

"The need is great and we can only make small emergency interventions. We hope that humanitarian organizations will take advantage of the improved security situation to come to the aid of the Somali people," said Lt Col. Kaamurari Katwekyeire of the group.

The refugee camps across the border in Kenya "are already far over capacity. Conditions are terrible," the senior U.S. official said.

Tens of thousands of Somalis have been risking the conflict zone in southern Somalia to cross the border. Many have walked for days into both Kenya and Ethiopia in search of food and water.

Al-Shabaab said it has formed a committee to deal with the drought, and urged aid groups to coordinate relief actions with the committee for access and assistance.

When asked if the U.S. trusts the Al Shabaab pledge to permit foreign assistance groups back into the region it controls in southern Somalia, the official said, "Absolutely not."

The official, who has direct knowledge of the intelligence in the region and the unfolding humanitarian crisis, noted there is infighting within the Al Shabaab network even as the U.S. military and the CIA step up operations against the group, increasing pressure on its growing alliance with Al Qaeda.

"Their actions are wholly unpredictable," he said. He declined to be identified because of the sensitivity of the information.

Aid agencies estimate that 10 million people in Kenya, Ethiopia, Djibouti, Uganda and Somalia are at risk of famine.

Conflict in Somalia is adding to the problem as government forces battle militants in the capital of Mogadishu. The Horn of Africa nation has not had an effective government for two decades.

CNN's Mishan Afsari and Barbara Starr contributed to this report.