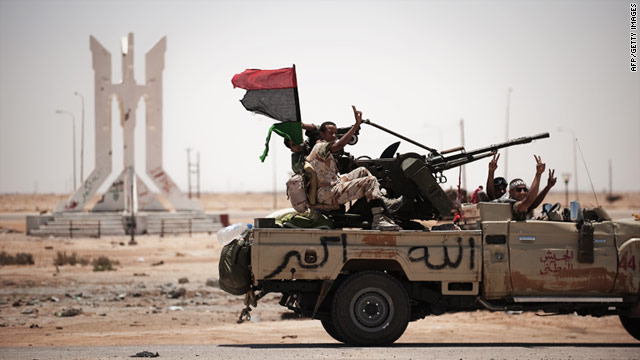 Libyan rebel fighters flash the victory sign as they drive to the frontline on June 11.
STORY HIGHLIGHTS

Fighting also engulfed Misrata, east of Tripoli, where 14 rebels were killed and 42 others wounded, according to Mohamed Ibrahim, a rebel spokesman in the city. Three civilians also died in rocket attacks launched by Gadhafi's men, Ibrahim said.

CNN could not verify the information.

Just west of Misrata, in Dafniya, 14 rebel fighters were killed and 42 were wounded Wednesday during a firefight with Gadhafi forces, said Ibrahim.

Clinton: Gadhafi should step down

The rebels ran over Al-Qawalish, a town of about 4,000 residents 50 kilometers (31 miles) southwest of Tripoli, a stronghold for Gadhafi since the start of the uprising in February.

Their attacks got under way around 7 a.m. from the north, the west and the south. On the western front, journalist David Adams said rebels were using Grad launchers, two Russian tanks and a number of other vehicles, rockets and guns.

The rebels captured the town around 2:30 p.m., entering from all three fronts, some having captured vehicles belonging to Gadhafi forces. Some rebel fighters could be seen breaking windows, shooting doors of houses and rummaging through families' belongings. Some said they were looking for weapons, but they appeared to be looting.

After they had lost control of the town, Gadhafi forces began shelling its periphery with Grad rockets. At least 12 government soldiers died, six were wounded and seven were captured, said Adams.

Rebels, whose casualties included at least seven dead and 15 wounded, said their next target would be Al Assabiah, said Adams.

Hassan Al-Jiwali, a rebel fighter from the Nafusa Mountains, said 50 of Gadhafi's men were killed and 15 were captured in the offensive.

Fighting has erupted in the western mountains in recent weeks as more than four months of battles have failed to yield a decisive victory for either side.

The first United Nations joint mission to reach the devastated mountain region found many people in dire need of food. A World Food Programme statement said markets were not functioning due to limited fuel and cash, and basic services such as electricity and water were lacking in some areas.

The rebels said they were moving northward, closer to the capital on the Mediterranean Sea. They intended to march to the city of Garyan, which sits on the main highway to Tripoli.

France has acknowledged arming the rebels, saying the weapons were for self-defense. However, French Defense Minister Gerard Longuet said Tuesday the weapons were no longer necessary because the rebels were becoming "more autonomous."

But debate continued over France's decisions.

In a contentious closed-door U.N. Security Council meeting Tuesday, Russia argued that, by sending weapons, France had violated the council's resolution that authorized the use of NATO force in Libya.

CNN's Kareem Khadder and Kathryn Tancos contributed to this report.