By Mohamed Fadel Fahmy for CNN 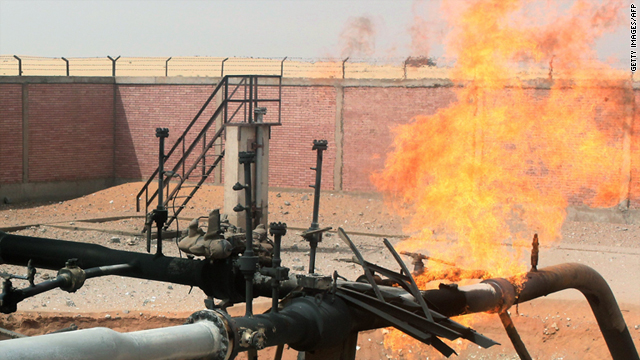 Cairo (CNN) -- A pipeline that supplies gas from Egypt to Israel exploded Monday in the northern Sinai Peninsula near Bir el-Adb, an Egyptian security official said.

The explosion appears to be an act of sabotage, said Gen. Saleh al-Masri, the head of security in Egypt's northern Sinai Peninsula.

"It is an act of sabotage, but the army and members of Egyptian Natural Gas Company are on the scene trying to understand what happened," al-Masri said.

The explosion has shut off the flow of gas to Israel and Jordan, said Ayman Jahin, a general manager at the gas company.

It is the third such attack on Egyptian pipeline infrastructure since the toppling of Hosni Mubarak's government earlier in the year. The first two attacks resulted in a halt in the flow of gas to Israel, which receives about 40% of its natural gas from Egypt.

The army cordoned off the area around the explosion, asking onlookers to return home," Mohamed Sabry, a freelance journalist at the scene, told CNN.

He said flames could be seen shooting into the sky hours after the explosion. Firefighters were working to contain the fire, he said.

Delivery of Egyptian gas to Israel came to a halt after an April attack on a pipeline in the Sinai Peninsula. The flow of gas through the pipeline to Israel was restored in early June.

In February, a gas pipeline in El Arish that sent natural gas to Jordan was set on fire, shutting off the flow of gas to not only Israel but but Syria, Jordan and Lebanon as well.

The issue of gas sales to Israel has become highly controversial in Egypt with various allegations circulating that Israel received below market prices for the gas and that Egyptian government officials enriched themselves on the deal.

The Israeli government and Israeli investors in the pipeline have categorically denied below market pricing for the gas and last month one of the major investors released a statement expressing public frustration that the Egyptian government was not moving more quickly to get the gas flowing again and threatened to pursue legal action.

The pipeline between Egypt and Israel became operational in 2008 and the arrangement represents one of the major economic agreements between the two countries.