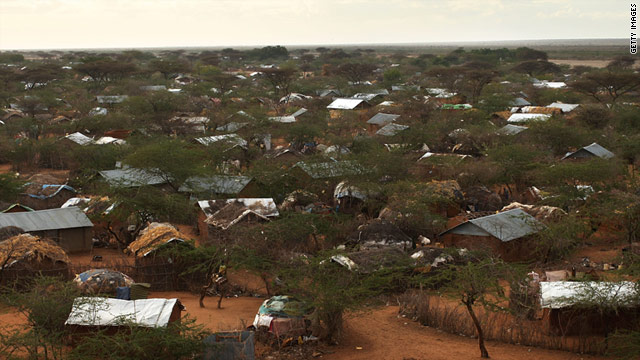 (CNN) -- More than 800 Somali children are arriving at crowded refugee camps in Kenya daily after walking for days to escape a prolonged drought, an aid group said this week.

About 10 million people are at risk of starvation as the Horn of Africa region faces the worst drought in 60 years, according to the United Nations.

The drought has left thousands of children in Somalia, Kenya, Ethiopia and Uganda malnourished, and millions others in danger, Save the Children said.

Nearly 1,300 people, including children, are arriving daily at the Dadaab refugee camps in northeastern Kenya, according to Save the Children.

"Children have made long journeys in terrifying conditions, often losing their families along the way and arriving at the camps in desperate need of security, health care and a normal life," said Catherine Fitzgibbon, program director of Save the Children in Kenya.

The influx of refugees in the Dadaab area has worsened conditions in a camp already battling limited resources. Dadaab, which was built for 90,000 people, is home to more than 350,000 refugees.

"Drought has forced children out of school as both human and livestock diseases spread," the United Nations said in a statement. "Competition for the meager resources is causing tensions among communities."

Conflict in Somalia is adding to the problem as government forces battle militants in the capital of Mogadishu.

The clashes between the two sides have made it hard for aid groups to access the hardest-hit areas.

"It is essential that we move quickly to break the destructive cycle of drought and hunger that forces farmers to sell their means of production as part of their survival strategy," said Josette Sheeran, the executive director of the World Food Programme.

"In Somalia, if we are not able to respond rapidly and effectively to it, there will be many more lives lost," said Mark Bowden, a U.N. humanitarian coordinator in the nation.

Food prices have gone up by 270% in some areas since last year, Bowden said.