Leading Libyan soccer players join the side of the rebels 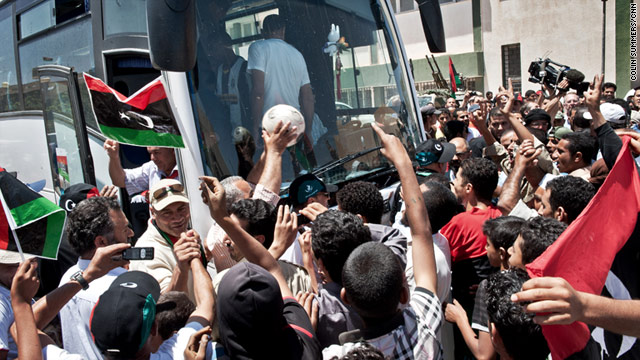 The defecting soccer players were greeted by cheering crowds and celebratory gunfire in the rebel town of Zintan.
STORY HIGHLIGHTS
RELATED TOPICS

(CNN) -- Seventeen prominent soccer players in Libya have defected to the rebels, opposition spokesmen said Saturday, in another setback to the county's embattled leadership.

Some were former members of the national team. They arrived in the rebel stronghold of Zintan in western Libya Saturday afternoon to cheering crowds that greeted them with celebratory gunfire and smiles.

Players posed with locals and briefly batted a soccer ball between their heads.

"I am telling Colonel (Moammar) Gadhafi to leave us alone and allow us to create a free Libya," goalkeeper Juma Gtat told BBC News earlier in the town of Jadu.

"In fact I wish he would leave this life altogether," Gtat said.

The footballers' defections come after a series of Libyan officials have done the same, increasing the pressure around Gadhafi to step down after more than four decades in power.

Abdul Hafiz Ghoga, a spokesman and deputy chairman of the opposition's Transitional National Council, said the players' defections are important to the young people of Libya and have a significance beyond the symbolic.

The athletes were en route to Mali, and announced their defections in Tunisia, according to Ghoga.