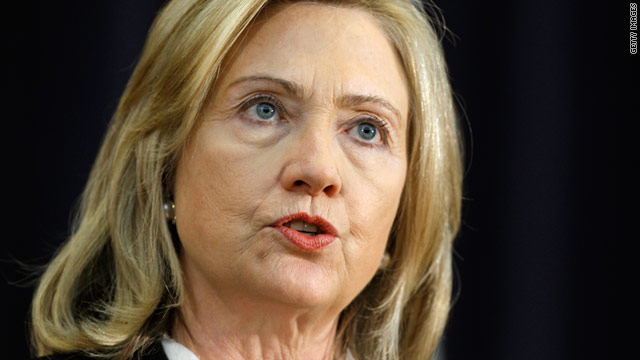 Secretary of State Hillary Clinton has said the NATO mission in Libya should not be abandoned, speaking during a trip to Jamaica.
STORY HIGHLIGHTS

Washington (CNN) -- Outgoing Defense Secretary Robert Gates said Thursday it would be a mistake for Congress to cut funding for U.S. military operations in Libya.

"I think, once we have our forces engaged, to deny them funding would be a mistake," Gates told PBS News. U.S. allies -- particularly the British, the French and the Italians -- consider Libya a vital interest, and "our alliance with them is a vital interest for us," he said, citing their efforts in Afghanistan.

Progress has been made toward the U.S. goal of ousting Libyan leader Moammar Gadhafi from power, Gates said. "Based on everything we see, the government gets shakier by the day. His forces have been significantly diminished. The opposition is expanding the areas under their control."

But, he acknowledged, "I don't think anybody can predict when he will and/or leave."

But the bottom line is, whose side are you on? Are you on Gadhafi's side or are you on the side of the aspirations of the Libyan people and the international coalition that has been created to support them?
--Secretary of State Hillary Clinton.

Gates was appointed to the job 4-1/2 years ago by President George W. Bush, and continued to serve in the role under President Barack Obama. He is slated to retire June 30.

But Congress has expressed impatience with the pace of the NATO military effort, which got under way three months ago to protect peaceful anti-government demonstrators in Libya. Republicans have accused Obama of having violated the War Powers Act by not having sought congressional authorization for the military intervention within 60 days -- a deadline that has passed.

Obama said last week that he did not believe he needed the approval because the U.S. military role is limited. But that didn't placate some House Republicans.

"I believe -- and I think most of my colleagues believe -- that the president has failed to make his case as to why we have engaged in Libya," House Speaker John Boehner told reporters Thursday. "I think the strategy was flawed from the beginning. As I said then, I understand the humanitarian mission, but the idea that the rest of the strategy was to hope that Gadhafi would leave begged the question of well how long are we going to be there?"

But, the Ohio Republican added, "I don't want to do anything that would undermine NATO or to send the signal to our allies around the world that we are not going to be engaged. This is primarily a fight between the Congress and the president over his unwillingness to consult with us before making this decision."

During a trip to Jamaica on Wednesday, Secretary of State Hillary Clinton dismissed fears of a quagmire and said the mission should not be abandoned now.

Clinton said the Libyan opposition has made "very clear progress" in its political organization, as well as in its fight against forces loyal to Gadhafi.

"But the bottom line is, whose side are you on?" she said to reporters. "Are you on Gadhafi's side or are you on the side of the aspirations of the Libyan people and the international coalition that has been created to support them?"

"For the Obama administration, the answer to that question is very easy."

Boehner said Wednesday that the GOP-controlled House will not back a resolution sponsored by Sen. John McCain, R-Arizona, expressing congressional support for limited American involvement in the NATO-led military campaign in Libya.

McCain's resolution, introduced Tuesday with Sen. John Kerry, D-Massachusetts, authorizes the commitment of U.S. forces for a year, while stressing the lack of support for any use of American ground troops.

McCain, the GOP's 2008 presidential nominee and a decorated veteran of the Vietnam War, said he believes Obama "did the right thing by intervening (in Libya) to stop a looming humanitarian disaster."

House leaders are preparing to hold a vote on the McCain-Kerry measure, but are also considering another resolution that would strictly limit U.S. involvement in Libya to a noncombat role.

Clinton testified Thursday on the matter in private session before the Senate Foreign Relations Committee.