From Mohamed Amiin Adow, For CNN 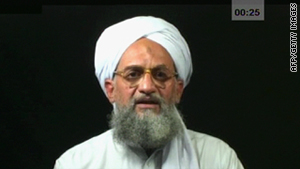 An al-Shabaab spokesman says the group has endorsed the succession of Ayman al-Zawahiri as leader of al-Qaeda.
STORY HIGHLIGHTS
RELATED TOPICS

(CNN) -- The Somali militant group al-Shabaab, an affiliate of al Qaeda, has endorsed the takeover of Ayman al-Zawahiri to head al Qaeda after U.S. forces killed Osama bin Laden last month, according to an al-Shabaab spokesman.

"We welcome Dr. Ayman al-Zawahiri and we will work with him, as we did with our late brother Osama bin Laden, and we are part of al Qaeda, as we promised before, said al-Shabaab spokesman Sheikh Ali Dhere.

The United States had a $5 million bounty on Mohamed's head. He was accused of being the mastermind behind the 1998 attacks on U.S. embassies in Nairobi, Kenya, and Dar es Salaam, Tanzania.