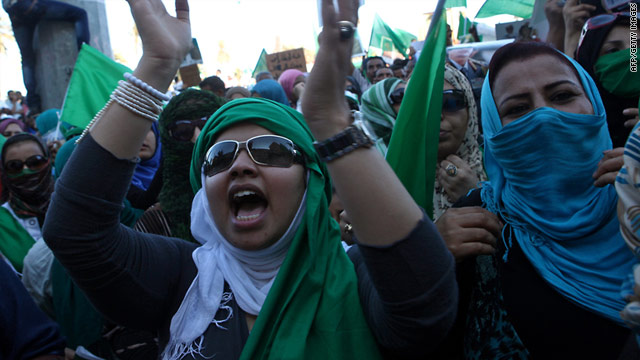 Tripoli, Libya (CNN) -- At first glance, "Mahmoud" would seem the perfect candidate to be a supporter of Moammar Gadhafi.

He has prospered during the Libyan leader's 41-year reign, first as a professional and later taking care of his deceased father's businesses.

But, as with many things in Tripoli, a first glance can be deceiving.

"Ninety percent of the people in Tripoli hate Gadhafi," Mahmoud told me over sips of espresso at a corner coffee shop this weekend. "All his people do is tell lies. If anyone tells you different they are just afraid."

CNN is withholding his real name for his own safety.

On an almost hourly basis, regime officials and government minders tell foreign journalists that Tripoli is a stronghold of Gadhafi and that dissent has vanished in recent months.

CNN, like other media here, is under severe government restrictions. But I recently managed to slip away from government minders to talk directly to several Libyans.

And according to several eyewitness accounts, major demonstrations were held against Libya's strongman as recently as last week.

And in the Souq al-Juma neighborhood of the capital, where anti-Gadhafi protests first erupted in February, the government's propaganda bubble is quickly burst.

While international journalists including me were ferried by government minders to a pro-Gadhafi rally at Green Square on Friday afternoon, multiple sources tell CNN that several Tripoli neighborhoods were wracked by running battles between protesters and security forces.

"They were protesting right around the corner. They streamed out of a mosque and onto the small square," said Mahmoud. "Almost immediately Gadhafi forces fired at them with live rounds."

Mahmoud and other sources say that the group was several hundred strong. He claims that three people were killed and that the area was put under lockdown by government security.

Other people in the area confirmed the death toll, but it is impossible for CNN to independently verify this account.

The government has repeatedly denied any anti-Gadhafi protests in Tripoli in recent weeks, including on Friday.

A taxi driver in his 20s also said that he took part in one of the protests in Souq al-Juma on Friday. CNN is calling him Jamal -- not his real name -- to protect his safety.

"We came out after afternoon prayers," he said, "we were unarmed and peaceful and they just shot at us."

He says he a bullet grazed his arm. Jamal says that unlike the rebels in the East, they don't have easy access to weapons to fight.

But he says, "I am not afraid. Even though we were unarmed, I am doing this for the future of my country."

Another protest was fired upon in a seaside neighborhood of the capital, Jamal says, citing friends who said they were at the demonstration.

Speaking to journalists in Tripoli is risky. Gadhafi's vast spying network means that almost anyone on the street could be an informer or worse.

Residents of Souq al-Juma say that hundreds, if not thousands, have been summarily arrested by the dreaded intelligence "brigades." They are never heard from again.

And it seems nowhere is safe.

Jamal says that recently, a family he knows pinned up a rebel flag out of sight in their home. Somehow the intelligence services found out.

"They stormed into the house, pulled down the flag, and arrested every man in that house," says Jamal.

But the worst indignity of all, people here say, is they can't bury their dead.

Regime officials will often then take the dead away, he says, not affording people a proper burial.