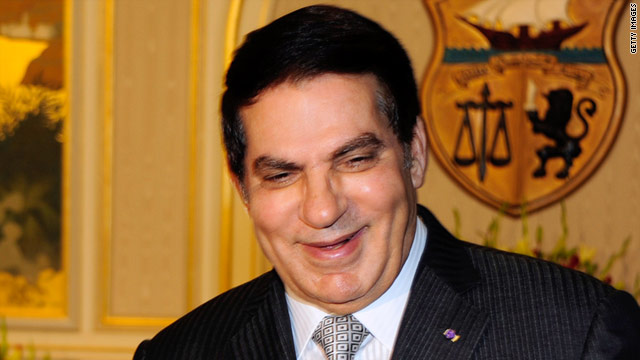 Zine El Abidine Ben Ali (pictured in 2010) was ousted in the Tunisian revolt that sparked protests across the Arab world.
STORY HIGHLIGHTS

(CNN) -- Former Tunisian President Zine el Abidine Ben Ali said Monday he has been unfairly portrayed and discredited by political opponents seeking to make a break with their country's past.

Ben Ali, in a written statement released by his lawyer, Jean-Yves Le Borgne, said it was time to break his silence because he is "tired of being made a scapegoat" and is a victim of "injustice."

Ben Ali said that recent searches conducted of his official and personal offices were "merely stage dressing" meant to discredit him.

The former leader denied allegations that he has improper bank accounts or property holdings outside of Tunisia. He called various charges against him "nothing but a masquerade with the only purpose of illustrating a symbolic break with the past."

Ben Ali argued, contrary to the assertions of his opponents, that he has always worked for what he thought "was the good of the Tunisian people, improving living standards and progressing on the path to modernity."

Protests against Ben Ali -- who had ruled Tunisia since 1987 -- began to erupt late last year. Fed up with corruption, unemployment and escalating prices of food, people began demonstrating en masse after the self-immolation suicide of a fruit cart vendor in December.

The revolt led to Ben Ali's ouster and triggered a wave of protests against longtime rulers across North Africa and the Middle East.

The former strongman's political party has since been dissolved by a court order. Parliamentary elections have been scheduled for July.

At least 300 people were killed and 700 injured during the Tunisian uprising, a top U.N. human rights expert said last month.