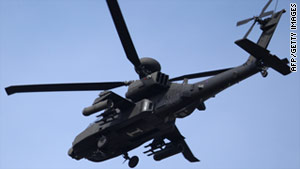 NATO-allied aircraft, including Britain's Apache helicopters, were being used for the strikes, the Ministry of Defence said.
STORY HIGHLIGHTS
RELATED TOPICS

According to a statement, Mitchell announced new support for the clearing of mines in besieged cities, including Misrata. He and Hague visited a Benghazi hospital treating those wounded in the conflict.

The visit, which included a discussion of the country's possible future, followed helicopter attacks by British and French forces on the regime's military.

"This successful engagement demonstrates the unique capabilities brought to bear by attack helicopters," said Lt. Gen. Charles Bouchard, who commands NATO's Libya operation. "We will continue to use these assets whenever and wherever needed, using the same precision as we do in all of our missions."

British forces, flying from the HMS Ocean, used Apache helicopters for the overnight strikes, according to the Ministry of Defence. French helicopters took off from the assault ship Tonnerre, the ministry said in a statement.

The Apaches struck a regime radar installation and a military checkpoint, both located around Brega, a key oil town in the east, British officials said. Hellfire missiles and 30mm cannon were used to destroy the targets, they said.

A French military spokesman said 20 targets, including vehicles, were destroyed. Several helicopters responded to small-arms fire from the ground, but none were hit, he said.

"The use of attack helicopters provides the NATO operation with additional flexibility to track and engage pro-Gadhafi forces who deliberately target civilians and attempt to hide in populated areas," NATO said in a statement.

Meanwhile, a string of explosions -- at least 10 -- rocked the Libyan capital of Tripoli early Saturday evening, CNN journalists reported. Six more explosions were heard early Sunday. One of the explosions struck an old military station about 25 kilometers (16 miles) south of the city, a government official said.

There also was fighting in the western city of Zintan.

According to Mamdouh Dardair, a rebel fighter, portions of the town were hit by a large number of rockets fired by Gadhafi forces. The rockets damaged infrastructure, but there were no immediate reports of injuries.

NATO reported that government forces were continuing "to attack the peoples of the western highlands," Lorimer said.

Meanwhile, rebels claimed to liberate Yefren and the nearby town of Kikla, both of which are about 25 miles (40 kilometers) east of their stronghold in Zintan, one rebel fighter said.

Talhat al-Jiwayli, a rebel on the front lines in Zintan, also said that anti-Gadhafi forces were surrounding the town of al-Rayyana, more than seven miles northeast of Zintan.

A resolution approved by the U.N. Security Council in March authorized member states "to take all necessary measures to protect civilians under threat of attack in the country, including Benghazi, while excluding a foreign occupation force of any form on any part of Libyan territory."

CNN's Kareem Khadder and Michael Martinez contributed to this report.