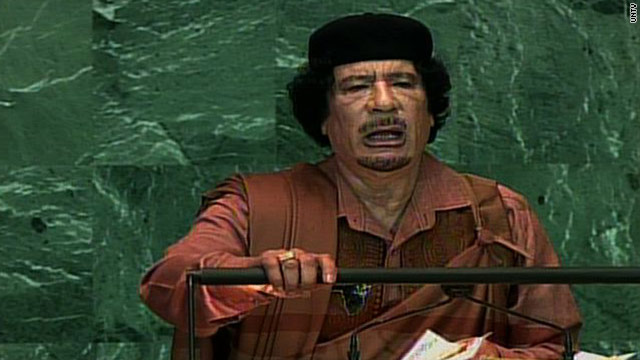 Tripoli (CNN) -- A woman believed to be Libyan leader Moammar Gadhafi's wife lashed out at NATO during an exclusive interview Friday with CNN, even as she expressed despair for her family's and her nation's plight -- saying, "Life has no value now."

Safia Farkash Gadhafi, who married Moammar Gadhafi in 1970 a year after he rose to power in the North African nation, is not thought to have ever previously spoken on the record with members of the Libyan or international media.

CNN cannot 100% confirm that the woman who spoke Friday is Moammar Gadhafi's wife, as Libyan authorities barred CNN from using its phone for fear the call might be tracked. But the interview was arranged by someone CNN knows to be Safia Gadhafi's office manager and by officials in Libya's foreign ministry.

In the interview, the woman ripped NATO for the death of one of her children, Saif al-Arab Gadhafi, who Libyan officials reported was killed by an airstrike late last month. The alliance has launched regular attacks in Libya in recent months, in pursuit of its stated mission to halt the killing of innocent civilians by Gadhafi's forces.

Russia now calling on Gadhafi to step down

Gadhafi's purported wife said four explosive projectiles were fired into one house after the evening Muslim prayer, a timing that she criticized and said was common. She disputed an earlier account, offered by Libyan government spokesman Musa Ibrahim, that both she and her husband were in the building at the time of the strike.

"I was not there, but I wished that I was, so that I may die with (Saif al-Arab)," the woman said.

Several of Moammar Gadhafi's eight surviving children -- six born to Safia, one born to her husband's first wife, plus one adopted child -- are believed to have taken roles in their father's government, including military commander Khamis Gadhafi and high-profile official Saif al-Islam Gadhafi. Yet the woman thought to be Safia Gadhafi said they should be off-limits from NATO strikes, which she claimed were killing innocents around Libya.

Libya Q&A: What you need to know

"My children are civilians, and they have been targeted. What do they have to do with this?" the woman told CNN.

Less than two weeks ago, the chief prosecutor of the International Criminal Court sought the arrest of Moammar Gadhafi and two relatives -- one of them Saif al-Islam, Safia's eldest son -- linking them to "widespread and systematic" attacks on civilians. But the woman claiming to be Safia Gadhafi said international legal authorities are going after the wrong people.

"I want them to prosecute NATO. They killed my son and the Libyan people," she said.

"They are defaming our reputation.They are committing war crimes, and accusing us of embezzling billions from the Libyan people. My conscience wouldn't allow such things."

The Libyan leader's purported wife expressed exasperation about the situation, with scores of countries allied against her husband's regime. She vowed that "we will live or die alongside the Libyan people," predicting her husband, his government and his forces will be vindicated.

"What would I want with life now? All I want out of life now is that the truth be heard," the woman said. "In the end, history will judge us."