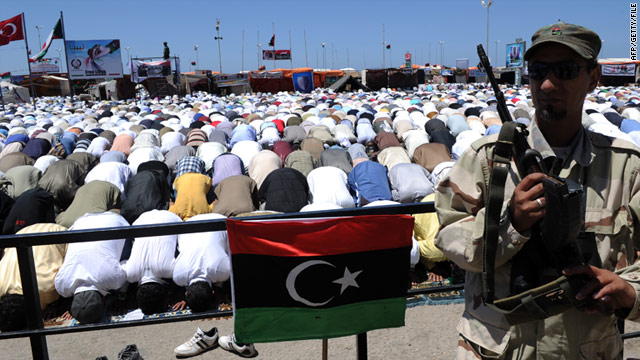 A Libyan rebel stands guard as Muslims perform a mass Friday noon prayer in the rebel stronghold of Benghazi on May 20.
STORY HIGHLIGHTS
RELATED TOPICS

Madrid (CNN) -- The office of Libya's prime minister sent a message to the Spanish government listing "a series of proposals that could lead to a ceasefire," a spokesman for Spanish Prime Minister Jose Luis Rodriguez Zapatero said Thursday.

The message, from the office of Prime Minister Baghdadi al-Mahmoudi, was also sent to other European capitals, the spokesman said, adding that he could not name which capitals.

Spain has contributed military assets, including troops, to the NATO-led mission to enforce a no-fly zone and protect civilians in Libya.